The city of Vallejo is posed to fire an officer who killed an unarmed man at a George Floyd protest last year, saying the detective violated the department's deescalation and deadly use of force policies.

VALLEJO, Calif. - The city of Vallejo is poised to fire an officer who killed an unarmed man at a George Floyd protest last year, saying the detective violated the department's deescalation and deadly use of force policies.

Though the Dec. 1 letter from the police chief obtained through a Public Records Request redacts the name of the officer, sources and a civil lawsuit have identified him as Detective Jarrett Tonn.

Tonn killed 22-year-old Sean Monterrosa June 2, 2020, in the parking lot of Walgreens, where there had been looting and break-ins during the George Floyd protests.

Police had originally said they believed Monterrosa had a handgun in his waistband and was facing officers, but it turned out that it had been a hammer and that the young man had been shot in the back of the head.

Open Vallejo noted that Tonn is the first Vallejo officer in at least 20 years to face termination for an on-duty killing.

The proposed termination comes on the same day an independent investigation by the OIR group found that the officer who shot and killed Monterossa was negligent.

In the termination letter, Police Chief Shawny Williams wrote that the officer in question failed to deescalate the situation and had no "tactical strategy" or "coordination with other available units" to be able to respond in the event of a pursuit.

Williams also questioned the officer's version of events when he told Internal Affairs that he saw Monterrosa running away and that he had "something" in his waistband.

But at least one detective said he never saw Monterrosa grabbing anything, Williams noted.

Williams also criticized the officer for firing five rounds from his Colt M4 Commando rifle through the windshield – one of the bullets went through the back of Monterrosa's head, killing him at the scene.

And the officer failed to record the shooting on his body camera, which he turned on afterward, Williams noted.

Ultimately, Williams said he found that the officer did not give a reasonable basis to believe that Monterrosa posed a threat to anyone.

"Given your tactical training and experience," Williams wrote, "you knew or should have known that you needed to carefully assess and plan to handle perceived threats…..If you believed that anyone in the parking lot was armed, you should have insisted on careful planning, including deescalation. You failed to do so, and in the midst of the confusion and chaos that you helped cause, exercised very poor judgement." 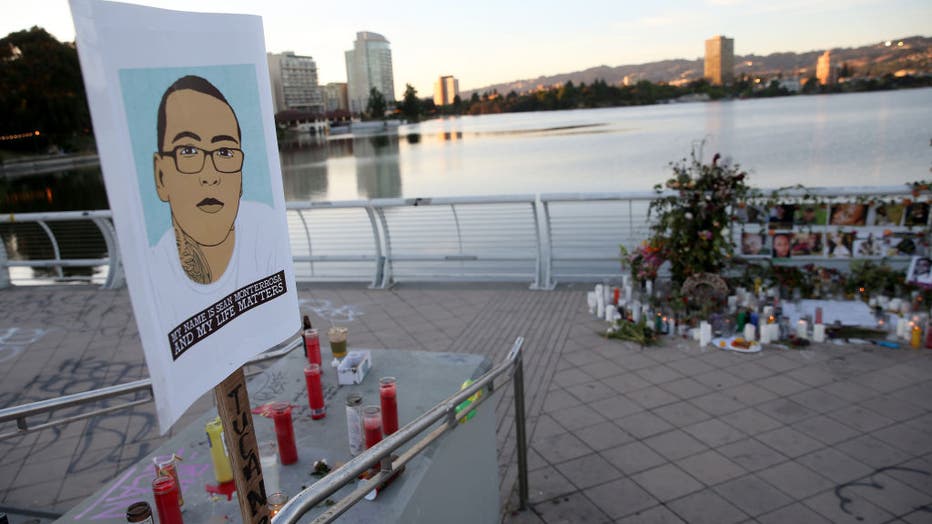 A memorial to Sean Monterrosa, George Floyd and other victims of police violence is seen at Lake Merritt in Oakland, Calif. (Jane Tyska/Digital First Media/East Bay Times via Getty Images)

Monterrosa worked with Latinx youth in the community and was dedicated to making a difference, his supporters said. His family said he loved to read and was an athlete who cared deeply for others; his last text to his sister was a petition to get justice for George Floyd.

Efforts to reach Tonn's attorney were not immediately successful on Wednesday. He has the right to appeal the chief's decision.

But in a statement this week, the Vallejo Police Officers’ Association said it "stands by our members throughout the discipline process, and we will continue to provide our support for the officer(s) involved in the Sean Monterossa incident." The statement also did not identify Tonn by name.

The union said it "welcomes any and all scrutiny into actions by our members – we always have and always will."

The union said that in this case, the officer involved was ordered to respond to a "dangerous and unpredictable situation, and were forced to make split-second decisions with lives potentially hanging in the balance."

Despite the independent investigation finding otherwise, the police union continued to repeat what has found to be untrue: That Monterrosa "shockingly" turned toward the officers and grabbed an object from his waistband area that appeared to be the butt of a gun.

"Any officer or person would recognize these actions to constitute an imminent threat of death or great bodily injury," the statement read. "Despite the politically motivated conclusions of the investigation, the concepts of de-escalation, although valuable, are not the appropriate tactics or techniques when a subject appears to be pulling a gun from their waistband. Officers are not required, nor should they be required, to wait to see the barrel of a gun before they can protect themselves with deadly force. By that time, it is already too late."

Tonn joined the force in 2014  and was in three non-fatal shootings in as many years, two of which resulted in serious injury for the person being pursued.

This week, Vallejo agreed to pay $150,000 in an excessive force claim to Jose Villalobos, who was assaulted in a church in 2018 by three police officers, the Vallejo Sun reported. Tonn was one of them.

The Monterrosa family also has filed a wrongful death lawsuit against the city of Vallejo and its police department.