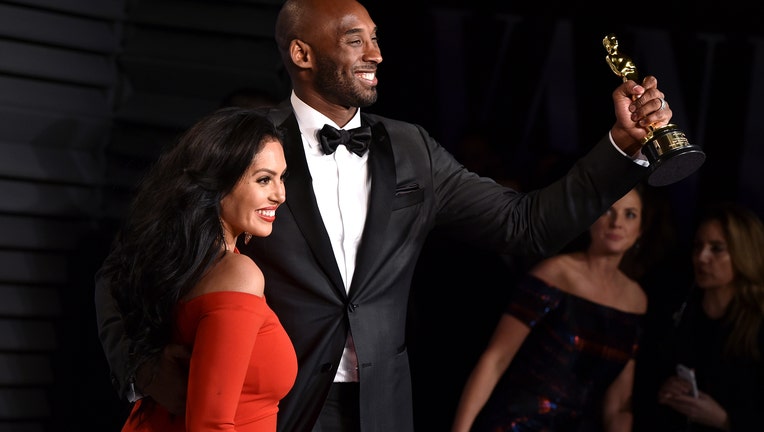 Vanessa Bryant hit back this week at Los Angeles County Sheriff Alex Villanueva, who challenged NBA superstar LeBron James to match reward money for information on the shooting of two deputies in Compton over the weekend.

In a series of posts on her Instagram Story, Bryant spotlighted screenshots of tweets and articles blasting Villanueva and calling out his department over the leak of graphic photos following the tragic helicopter crash that killed her husband, Kobe Bryant, their young daughter Gianna, and seven others in January.

Bryant shared tweets from user @ElanMaree, which called into question the validity of Villanueva's comments to reporters on Monday regarding the criminal justice system.

The Associated Press's California-based crime reporter, Stefanie Dazio, initially shared a video clip in which Villanueva urged athletes, elected officials and civil leaders to emphasize trust in the criminal justice system, rather than "fanning the flames of hatred." 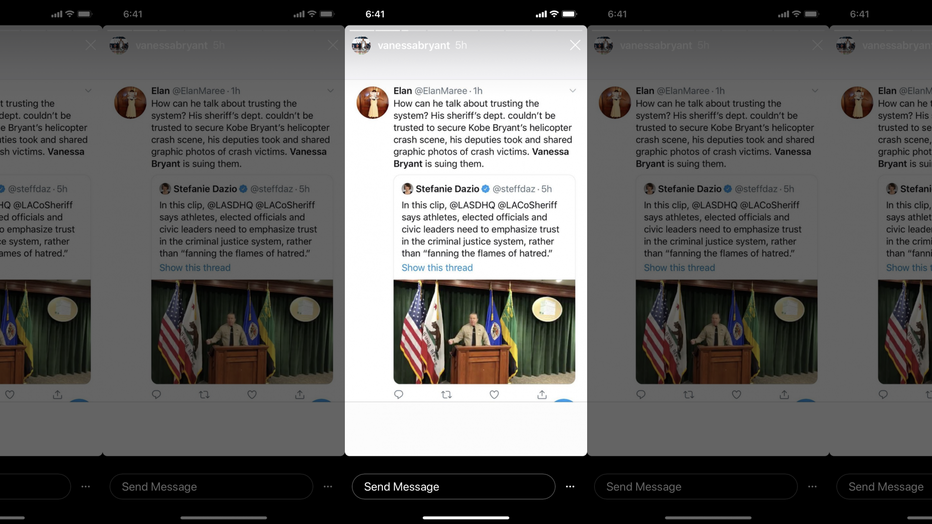 "How can he talk about trusting the system?" asked @ElanMaree in a quote tweet. "His sheriff's department couldn't be trusted to secure Kobe Bryant's helicopter crash scene, his deputies took and shared graphic photos of crash victims. Vanessa Bryant is suing them."

Next, Bryant shared a May headline and article from The Hollywood Reporter, showing that the union for deputies of the Los Angeles County Sheriff's Department was suing Villanueva to keep the internal affairs investigation into the distribution of the photos private. 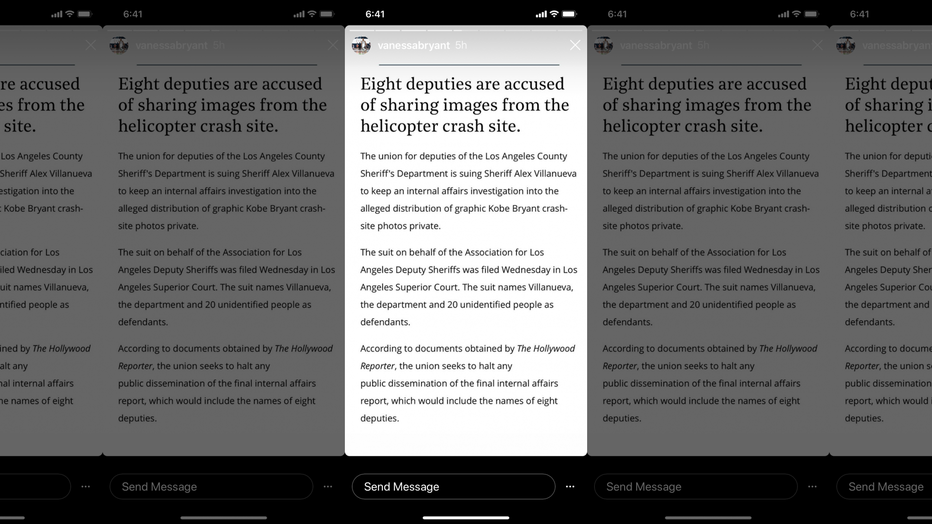 Bryant's own claim against Villanueva's office was filed in May.

“No fewer than eight sheriff’s deputies were at the scene snapping cell-phone photos of the dead children, parents, and coaches," the claim reads, per People magazine. "As the department would later admit, there was no investigative purpose for deputies to take pictures at the crash site. Rather, the deputies took photos for their own personal purposes.”

The following text she took a screenshot of was from lakersnation.com, discussing reporting from The Los Angeles Times about a potential cover-up attempt by Villanueva. 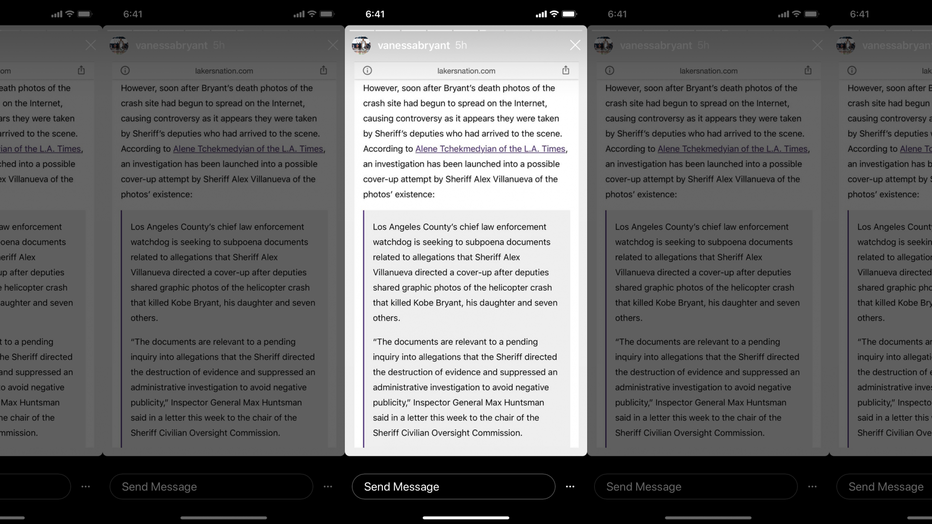 Villanueva has since made waves, defying a subpoena related to how he would protect inmates from COVID-19.

In a Monday interview with KABC Radio on the John Phillips Show, Villanueva challenged James to contribute to efforts to find the gunman who shot two Los Angeles County deputies at point-blank range and to match and double the reward money being offered for information.

"This challenge is to Lebron James. I want you to match that and double that reward," Villanueva said. "I know you care about law enforcement. You expressed a very interesting statement about your perspective on race relations and on officer-involved shootings and the impact that it has on the African-American community.

"And I appreciated that," he continued. "But likewise, we need to appreciate that respect for life goes across all professions."

The Los Angeles Lakers star has been one of the most vocal professional athletes on social issues and police misconduct. After Jacob Blake was shot multiple times by officers in Wisconsin last month, leaving him paralyzed, James said Black people in America are "terrified" of police misconduct.

"I know people get tired of hearing me say it, but we are scared as Black people in America," James said following the Lakers' Game 4 win over the Portland Trail Blazers last month. "Black men, Black women, Black kids, we are terrified."

He earlier tweeted his frustrations about police shootings.

“And y’all wonder why we say what we say about the Police!! Someone please tell me WTF is this???!!! Exactly another black man being targeted,” James wrote. “This s--- [sic] is so wrong and so sad!! Feel so sorry for him, his family and OUR PEOPLE!! We want JUSTICE.”

There was no immediate response from James to the sheriff’s challenge. 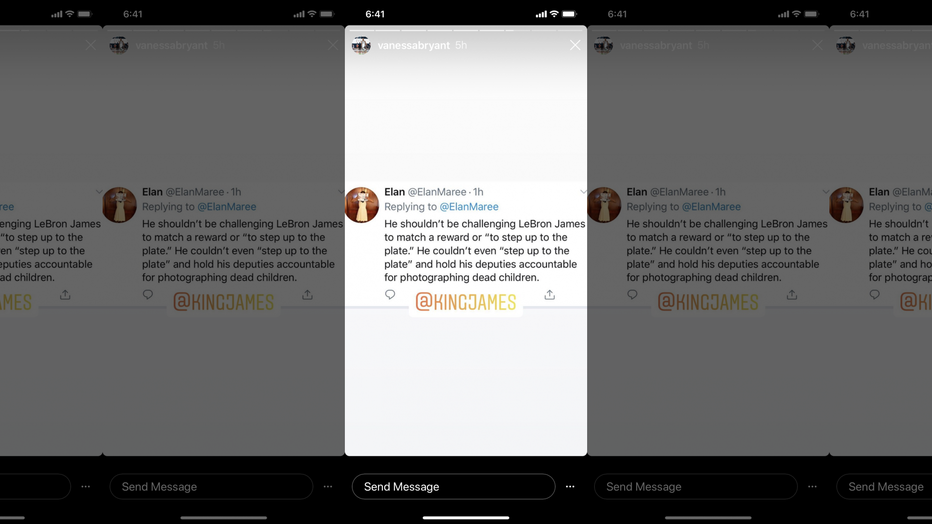 Bryant posted a second tweet from @ElanMaree, saying Villanueva should not be challenging James to "step up to the plate" because the sheriff "couldn't even 'step up to the plate' and hold his deputies accountable for photographing dead children."

She then posted a photo of eight of those killed in the crash, including her husband and daughter, and tagged the Los Angeles County Sheriff Department's Instagram account.

Lastly, Bryant posted a screenshot of a quote from the City of Angels' Democratic Mayor Eric Garcetti, condemning the shooting of the deputies.

"Not all deputies are bad apples. Prayers for the 2 deputies that were shot," she wrote.