Car crashes into apartment and injures firefighter in San Jose

San Jose fire crew are investigating a crash that sparked a fire and injured a firefighter Friday afternoon.

SAN JOSE, Calif. - Firefighters are responding to heavy smoke and flames after a vehicle crashed into an apartment building in San Jose Friday afternoon.

Officials said the incident happened just before 4 p.m. on the 5600 block of Calmor Court. San Jose Fire Department said a gas meter was struck. A second alarm was called by 4:16 p.m. The fire extended into the attic of a two-story, four-unit apartment building.

Pacific Gas and Electric has responded and secured electrical equipment, but have yet to secure a gas line. They are using heavy equipment in the area. At around 7:30 p.m. the fire department said the fire was still active and that several more hours of work were expected.

At least one firefighter was taken to the hospital with non-life threatening injuries. There was no word of evacuations.

The fire department shared video of the charred vehicle that crashed. The vehicle, which appears to be a station wagon, is being towed.

People are asked to avoid the area. 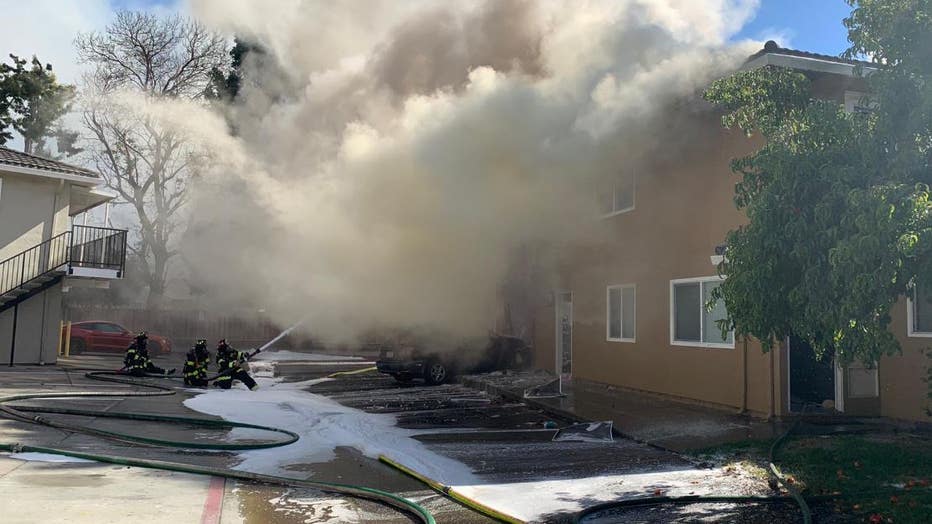