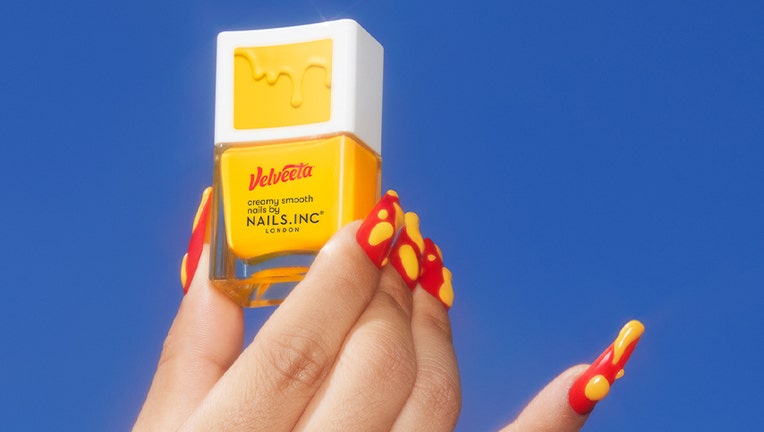 CHICAGO - Velveeta wants to help you live "your biggest, boldest life" by creating its first-ever nail polish that smells like cheese.

The Kraft Heinz-owned cheese brand on Tuesday shared its new "Velveeta Pinkies Out Polish" products, which include two different colors as well as nail stickers. The new collaboration was done with the beauty brand Nails.INC, where the products are being sold.

Velveeta’s red "Finger Food" polish and yellow "La Dolce Velveeta" polish are available together for $15. The colors are intended "to make your nails look as smooth as Velveeta feels" and were designed to be worn together.

The nail polish also smells like cheese, which appears once the long-wear polish is fully dry, the company said. It also notes that while it may smell edible, the polish is not actually made of Velveeta and should not be consumed.

There’s also a pack of nail stickers made to look like cheese dripping down your nails for $4.99.

"Now you can be as bold as the cheese you love," a description reads.

"VELVEETA is known for its rich, creamy texture and cheesy, melty goodness, so what better way to bring this to life for our fans than with something equally as rich and creamy — nail polish," Kelsey Rice, senior brand communications manager at The Kraft Heinz Company, said in a statement.

Other food companies have made headlines for their unique marketing ideas in recent days. Earlier this year, Krispy Kreme started selling a dozen glazed doughnuts for the average U.S. price of a gallon of regular gas. In April, it also teamed up with Cinnamon Toast Crunch to debut three new cereal milk-inspired doughnuts.

Most recently, the Girl Scouts debuted a cookie-inspired makeup line of eyeshadow palettes and lipsticks.