A meteor lit up the night as it crossed the sky above of Brittany, France, on Sept. 5, 2021. Credit - Damgan La Roche Bernard Tourisme via Storyful

ARZAL, France - A camera captured a bright meteor that recently streaked across the sky above France, illuminating the area.

A video, captured Sept. 5 on a webcam near the town of Arzal in the Brittany region of northwestern France, shows the streak of light in the sky hurtling across the atmosphere.

The video was shared by the local tourism board, called Damgan La Roche Bernard Tourisme, on Facebook. Many commenters replied, confirming they also saw the bright light in the sky.

"This is impressive. I was out in the dark and suddenly a light at my back, turned around and saw it leave," one user wrote, according to a translation from French. 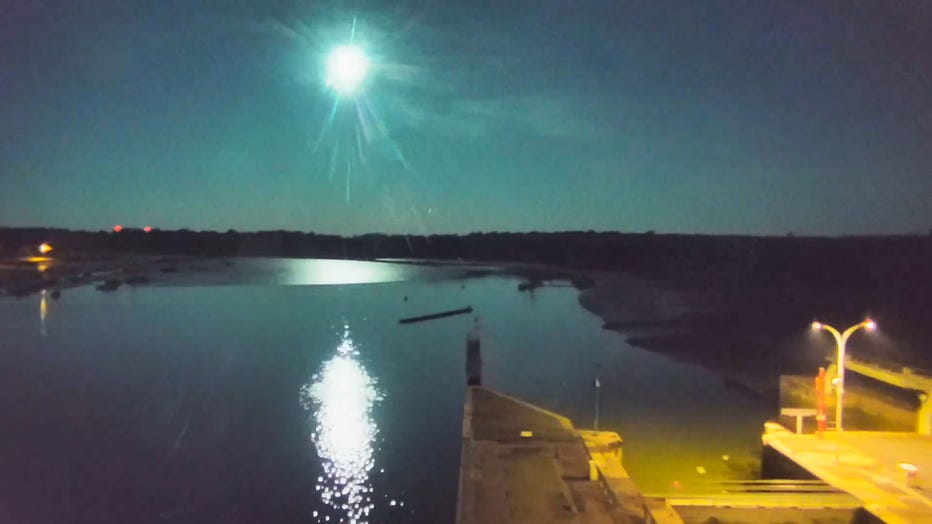 The meteor is pictured in the sky above Arzal, France, on Sept. 5, 2021. (Credit: Damgan La Roche Bernard Tourisme via Storyful)

The meteor was also spotted hundreds of miles away in the United Kingdom. Police in the country of Hampshire, located in southeast England, shared footage of the spectacle on Twitter.

"Sometimes the job has us in the right place at the right time," the Hampshire Roads Policing Unit wrote.

The Weather and Radar UK company said the meteor was visible as far north as Oxfordshire.

Stargazers will get another chance to see the sky light up beginning in late September through November during the upcoming meteor shower known as the Orionids.

The Orionids, which will peak around Oct. 20-21, are known for their brightness and speed, according to NASA — traveling at about 148,000 mph into the Earth's atmosphere. As a result, the fast meteors leave a glowing "train" that lasts for several seconds to minutes, scientists say.

NASA considers the Orionids to be "one of the most beautiful showers of the year."

The Orionid meteor shower is viewable in both the Northern and Southern hemispheres during the hours after midnight.