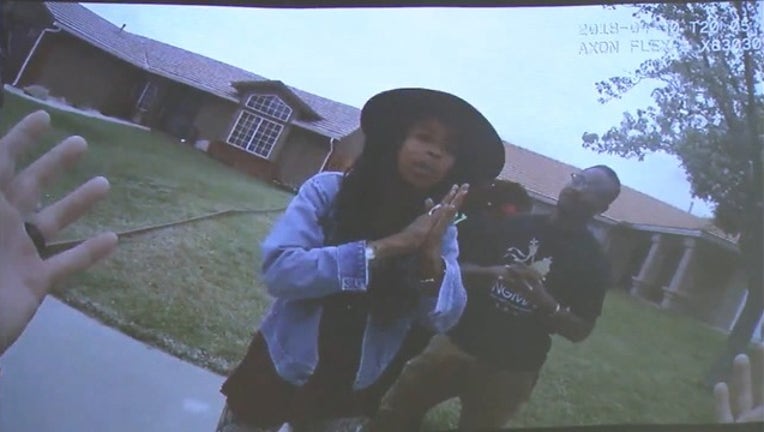 The body camera footage released by the Rialto Police Department shows a laid-back and at times light-hearted interaction between officers and the group they had pulled over, which included the granddaughter of reggae legend Bob Marley.

The footage shows they later disagree whether the 911 call, made by an older white woman, was racially motivated, but the interaction never becomes heated.

The group had been checking out of their Airbnb rental with luggage when a neighbor called police April 30 reporting a possible burglary.

Filmmaker Kells Fyffe-Marshall posted a short video on Facebook showing a portion of the interaction with police and wrote that they were "surrounded" by seven police cars and told to put their hands in the air.

"They locked down the neighborhood and had us standing in the street. Why?" she wrote. "A neighbor across the street saw three black people packing luggage into their car and assumed we were stealing from the house."

The video quickly spread on social media and was shared by New York Daily News columnist Shaun King, who described it as "a group of young black women come face to face with death."

Rialto police Chief Mark Kling shared much more extensive footage of the interaction at a news conference Tuesday, saying the department has been unfairly accused of racism and has been handling dozens of calls for burglaries in the area.

"The videos speak for themselves," he said. "Our officers handled the situation with professionalism, dignity and respect."

The videos show Officer Nick Besheer repeatedly joking with the women, and reacting with excitement that one of them was Marley's granddaughter and that they were in town from Canada, where Besheer was born.

Fyffe-Marshall commends officers at one point.

"The police in Cali, they're not Toronto police and I respect that," she says. "If you were Toronto police we'd all be on the floor, hands up and we wouldn't even have the chance to be like, 'Guys, it's an Airbnb."

The women do say that they feel the 911 caller was motivated by race.

When one officer radios in a "code four," Fyffe-Marshall says it's actually a "code black." Code four means no further assistance needed.

Later, Marley's granddaughter, Donisha Prendergast, expresses frustration that the matter isn't being cleared up faster and said they wouldn't have been reported if they were white.

Besheer asks her what race had to do with it. The talk ends as Besheer walks away, saying what sounds like, "Stop pulling it, guys."

Fyffe-Marshall and Prendergast didn't respond to requests for comment Tuesday.

Their attorney, Jasmine Rand, said Tuesday that she put Rialto police "on notice of the potential for litigation."

Marie Rodriguez, the owner of the Airbnb the group was renting, defended her neighbor's call to 911 and the police response.

Rodriguez said it was the first time she rented out her home on Airbnb, and that her neighbor was concerned when she saw strangers packing up suitcases. The neighbor told Rodriguez that when she approached the group, they behaved strangely.

"She walked over, smiled at them and waved and they basically looked at her like she was a Martian," Rodriguez said.

The police video captures the neighbor's reasoning for calling 911.

"They had luggage in their hands and they weren't really looking at me," said the woman, who wasn't identified. "They didn't behave like neighbors and I know the couple that owns the house and I didn't recognize them ... I wasn't being nosy. I was just being observant."