The graphic parody video, which reportedly shows a fake President Donald Trump shooting and assaulting members of the media and his critics, was played at a conference for his supporters at his Miami resort, according to The New York Times.

WASHINGTON - A graphic parody video showing a fake President Donald Trump shooting, stabbing and assaulting members of the media and his critics was reportedly shown at a conference for his supporters last week at his Miami resort, according to footage obtained by The New York Times.

The video, which was reportedly shown at the three-day conference held by American Priority at Trump National Doral Miami, included the logo for Trump’s 2020 re-election campaign and consisted of a series of internet memes, the newspaper reported. Trump was not there. 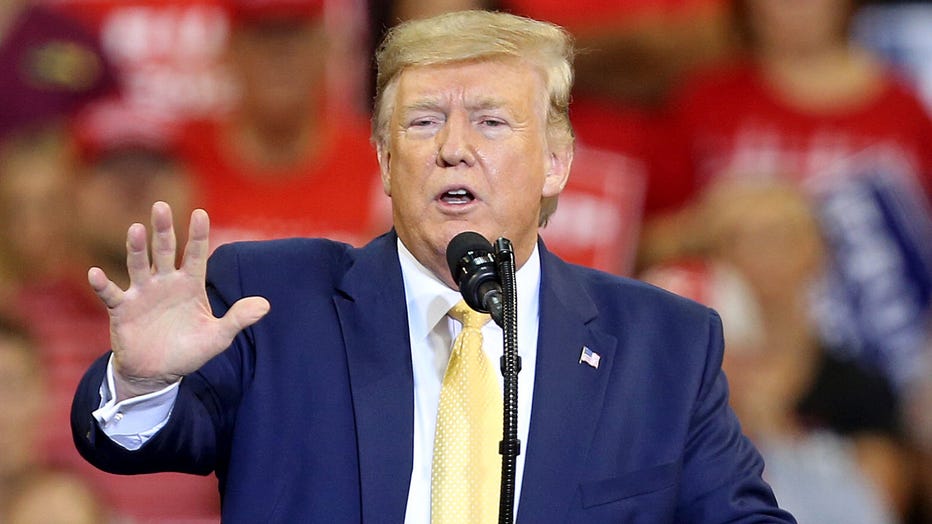 One part of the video shows Trump’s head edited on the body of a man opening fire inside the “Church of Fake News” on parishioners — whose faces are edited to appear as his political opponents or the logos of media organizations, according to the New York Times.

The Times said the video appears to be an edited scene of a church massacre from the 2014 action spy comedy film “Kingsman: The Secret Service.”

According to the newspaper, the video shows a fake Trump firing or otherwise assaulting Black Lives Matter, Vice News and other news organizations. It also reportedly depicts the fake Trump striking the late Sen. John McCain in the neck, hitting and stabbing TV personality Rosie O'Donnell in the face and lighting Sen. Bernie Sanders' head on fire.

Others shown in the video reportedly include former President Barack Obama, Democratic Rep. Maxine Waters, Bill and Hillary Clinton and Rep. Adam Schiff, who as Democratic chairman of the House Intelligence Committee is leading the impeachment inquiry of Trump, according to the Times.

The clip ends with Trump putting a stake into the head of a person with a CNN logo for a face, the Times reported.

The Washington Post, BBC, PBS, NBC and Politico are also among the news organizations depicted as victims of the fake Trump's violent fury. Parts of the video were posted on YouTube in 2018 by a user with a history of creating pro-Trump mash-ups, the Times reported.

Event organizer Alex Phillips told the Times the video was played as part of a "meme exhibit" and was not associated with or endorsed by the conference "in any official capacity."

"American Priority rejects all political violence," he said, adding that the organization was looking into the matter.

Several of Trump’s top surrogates, including former spokeswoman Sarah Huckabee Sanders, Donald Trump Jr. and Florida Gov. Ron DeSantis, were scheduled to speak at the conference, according to the Times.

Sanders and a person close to Trump’s son told the Times on Sunday that they did not see the video at the conference.

“I was there to speak at a prayer breakfast, where I spoke about unity and bringing the country together,” Sanders told the newspaper. “I wasn’t aware of any video, nor do I support violence of any kind against anyone.”

A spokesman for Trump’s campaign told the New York Times he knew nothing about the video.

“That video was not produced by the campaign, and we do not condone violence,” spokesman Tim Murtaugh told the newspaper.

A DeSantis spokeswoman did not respond to an email from the Times seeking comment.