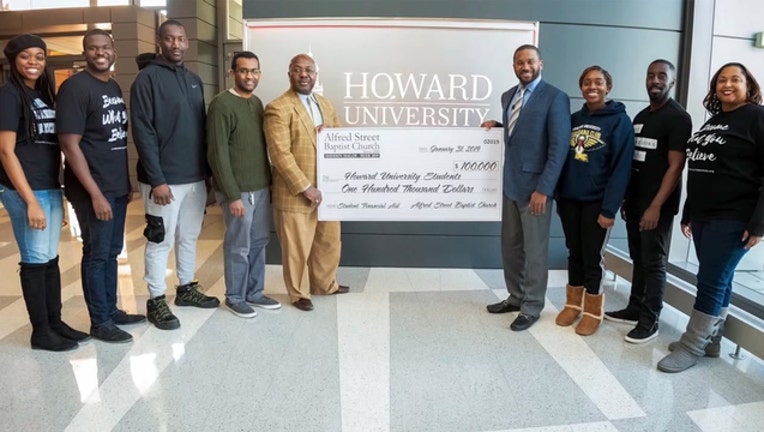 The 25-year-old senior is enrolled in seven classes at Howard University. Some days, she has class from 10 a.m. until 7 p.m., with only enough time to pick up her 6-year-old son, Ma'Khi, from school and to eat before her overnight shift as a dispatcher for D.C. 911 emergency services. She has to choose between eating, sleeping or studying during her limited breaks.

Thompson arrives home before dawn — 5 a.m., maybe 6 a.m., depending on how busy work is — and sleeps for a few hours before repeating the routine.

To add to her stress, Thompson was in danger of not graduating. She owed about $2,500 to Howard in tuition, and she didn't know how she would be able to pay that debt.

But last week, a small miracle — an enormous act of kindness — happened.

Alfred Street Baptist Church in Alexandria, Va., decided to clear the debt of 34 Howard students, including Thompson. The university chose full-time students with a grade-point average of 2.0 or higher who demonstrated significant financial need, with balances from $100 to more than $3,000, said Crystal Brown, Howard's vice president of communications.

During a 30-day fast that involved limiting consumption of food, social media and money, church members were asked to abstain from unnecessary purchases and, at the end of the month, consider donating the money they had saved to a charitable cause.

Participants did not know the cause that would benefit from their generosity, but church leaders promised to pick a worthy recipient. The Rev. Marc Lavarin said the idea of donating to Howard — among the nation's leading historically black colleges and universities, known as HBCUs — came to him during prayer.

"I thought, 'What better way to celebrate Black History Month than investing in the young, black heroes of HBCUs?' " he said.

Alfred Street Baptist Church has a long-standing relationship with HBCUs. About 60 percent of its congregants attended an HBCU, and the church hosts a festival for prospective HBCU students each year.

In addition to the gift to Howard, the church donated $50,000 to Bennett College in North Carolina, one of two remaining women-only historically black colleges and universities. The school was in danger of losing accreditation.

More than 4,000 parish members contributed to the $100,000 given to erase the debts of Howard seniors. On Jan. 31, the students received an email from the Office of Financial Aid saying a "special financial aid opportunity" awaited them. Students had to report to the Interdisciplinary Research Building on campus to claim their prize.

Studio lights and a camera crew met them. Alfred Street Baptist ministers and staff joined the Office of Financial Aid to surprise the seniors, and made a video of students' reactions to show the congregation.

Perrye Rollins, a 22-year-old Howard senior who received $8,000 from the church, said she is still in shock and feeling grateful.

"Now, I can focus on school, my goal is to earn a 4.0 for this semester, and with this gift I can now put all my energy toward that goal and not worry about paying bills to graduate," she said. Rollins has relied on financial aid and assistance from family and friends to pay her tuition, but "there's always a gap" between the aid she receives and what she owes the university, she said.

At Howard University, about 95 percent of the student population — which totals 8,616 — receives financial aid. Paying the $24,966 yearly undergraduate tuition is a "big issue for a lot of our students," Rollins said.

Thompson said she is relieved and humbled by Alfred Street Baptist's generosity.

"They have lifted a huge weight off of my shoulders," she said.

The Rev. Howard-John Wesley, the church's pastor, said he hopes the gift inspires other churches to contribute to their local HBCUs — through financial donations, jobs or mentorship.

"We're blessed, and we believe when you're blessed you should be a blessing to others," Wesley said. "These 34 students are going to change the world, and we're just glad to be part of their resume."