The voices of crowds gathered to watch Fagradalsfjall volcano on Iceland’s Reykjanes Peninsula.

So far, it seems that 2021 is an active year for volcanic eruptions. Since February and March, three volcanoes in three separate countries have released lava, including the Fagradalsfjall volcano in Iceland, Mount Etna in Italy and Pacaya in Guatemala.

All of the erupting volcanoes have drawn crowds of spectators set on marveling at the fiery spectacles.

Stunning video captured the Fagradalsfjall volcano on April 1 spewing lava as expressions of amazement can be heard in the background. Local reports said tens of thousands of people had visited the area to see the eruption. 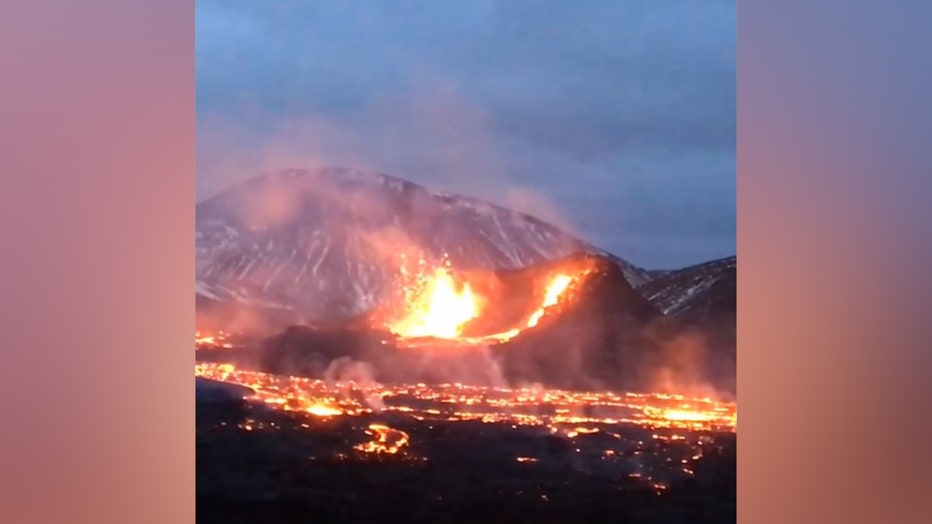 The Mount Fagradalsfjall volcano, located on the Reykjanes Peninsula in southwestern Iceland, sprung to life on March 19, marking the area's first volcanic eruption in nearly 800 years.

Iceland’s Department of Emergency Management said it was not anticipating evacuations because the volcano is about a mile and a half from the nearest road.

"We are monitoring the situation closely and as of now it is not considered a threat to surrounding towns," Iceland Prime Minister Katrín Jakobsdóttir said. "We ask people to keep away from the immediate area and stay safe."

Lava and ash spewed from Mount Etna in Catania, Italy, as the volcano erupted on March 12.

In addition to Iceland experiencing the ongoing eruption, Italy and Guatemala have also been visited with a few volcanic eruptions of their own this year.

Italy’s Mount Etna volcano belched out a towering cloud of ash and lava stone March 7 onto Sicilian villages, after a series of explosions that began in mid-February.

RELATED: Lava rains from the sky during latest eruption of Italy’s Mount Etna

The explosion was the 10th such big blast since Feb. 16, when Europe’s most active volcano started giving off an impressive demonstration of nature’s fire power, coloring the night sky in shocking hues of orange and red.

Like its distant Italian cousin, the Pacaya volcano just 30 miles south of Guatemala’s capital has also been active since February.

A large plume of smoke and ash was seen rising from Guatemala’s Pacaya volcano on April 1.

Tourists frequently hike up to visit the Pacaya’s peak, but those trips have been temporarily canceled due to the recent activity. Pacaya has a clear view of the nearby Volcano of Fire, which erupted in 2018, emitting a fast-moving avalanche of super-heated muck that killed at least 110 people and left about 200 missing.

Volcano tourism is the lifeblood of villages like San Francisco de Sales, perched near Pacaya’s peak, and for locals it is a question of learning to live with the danger.

Pacaya had an explosive blast in 2010 that killed a reporter and two local people, but the most recent eruption has not caused any injuries thus far.

The Associated Press, FOX News and Storyful contributed to this report.