French President Emmanuel Macron on Bastille Day reflected on how war has "re-emerged on our continent" in a message shared along with a video from the annual military parade in Paris on July 14, 2022. Credit: Emmanuel Macron via Storyful

PARIS - The war in Ukraine has even shaken up Bastille Day, a powerful political, historical and symbolic event in France.

France celebrated its national holiday Thursday with thousands of French troops marching down the Champs-Elysees avenue alongside allies from Eastern Europe. The traditional parade also featured warplanes, military vehicles and a drone in a performance showing off France's might and its military efforts to support Ukraine.

The opening of this year's Bastille Day parade was designed to demonstrate France’s commitment to NATO and to European allies touched most closely by the war in the wake of Russia's invasion of Ukraine 20 weeks ago.

Troops from Estonia, Latvia, Lithuania, Poland, Czech Republic, Slovakia, Romania, Bulgaria, and Hungary were assigned the front position, bearing their national flags. Multinational troops deployed in Romania after the invasion marched after them.

Higher-than-usual temperatures baking Paris this week didn't deter crowds from gathering to watch the parade, surrounded by tight security along the Champs-Elysees. 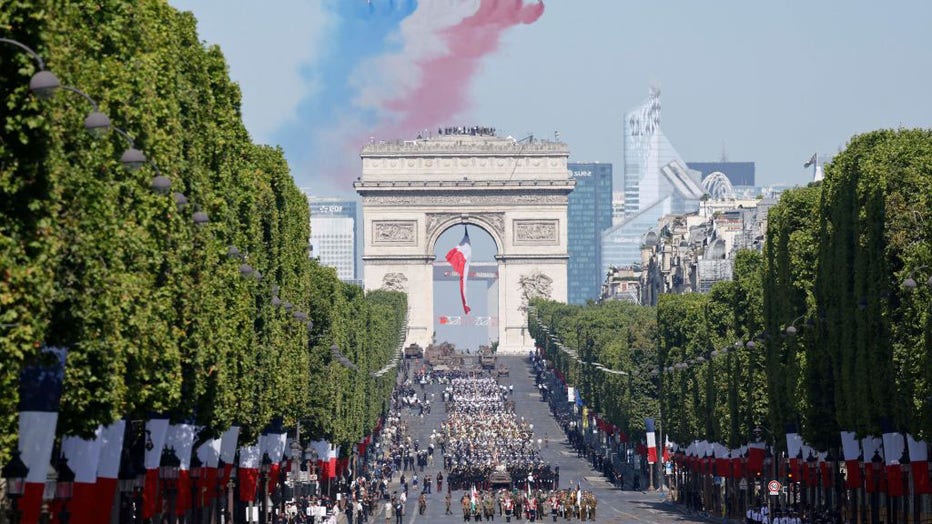 TOPSHOT - French elite acrobatic flying team "Patrouille de France" (PAF) releases smoke in the colors of the French flag as they perform a fly-over during the Bastille Day military parade on the Champs-Elysees avenue in Paris on July 14, 2022. (Phot

A group of young people from France's universal national service program stood up and applauded as the parade got underway, visibly thrilled to be watching the event in person. A fighter jet flyover wowed the crowd, especially the opening formation that trailed red, white and blue smoke over the Arc de Triomphe.

On the eve of Bastille Day, French President Emmanuel Macron hailed Ukraine’s unexpected ability to stand up to Russia's aggression. He called for a review of France’s military organization to make it more nimble in the face of changing threats, as well as for a "rethink" of France's military presence in Africa.

"Each and every one of us was struck by the Ukrainian nation’s moral strength that allowed it to hold on despite an initially unfavorable balance of power," Macron told French military brass Wednesday night.

"I’ve asked the minister, the joint chief of staff and the general delegate for armaments to review the pertinence of our organizations, our structures and even the way we look at things ... to sometimes be able to make decisions faster, to coordinate better and with efficiency, and to adapt to the evolutions of conflicts," the president said.

French President Emmanuel Macron and his wife Brigitte Macron attend the Bastille Day military parade on the Champs-Elysees avenue in Paris on July 14, 2022. (Photo by MICHEL EULER/POOL/AFP via Getty Images)

Macron and other dignitaries presided over Thursday's event in which more than 6,000 people and 200 horses of France's Republican Guard took part, along with 65 planes, 25 helicopters and 181 vehicles.

A Reaper, a sophisticated American combat drone, swooped over the parade for the first time. Such a drone embodies the modernization of France’s military equipment, and was used in Niger and elsewhere in Africa's Sahel region as part of France's military operation to defeat jihadists. Drones are also a powerful symbol of the Ukraine war, where they're being used more intensively than any other war to date.

The motto of this year's Bastille events, "Share the Flame," is a reference to France hosting the Olympic Games in 2024. High-profile Olympic and Paralympic athletes were invited to attend. The spectacle closes with a nighttime fireworks show set off from the Eiffel Tower.

Bastille Day marks the July 14, 1789, storming of the Bastille prison by angry Paris crowds that helped spark the French Revolution and by extension, a spirit of national unity, thanks to broad rights granted to citizens in the ensuing years.

Celebrations are held in towns across France and beyond, with parties from New Orleans to Australia and beyond.