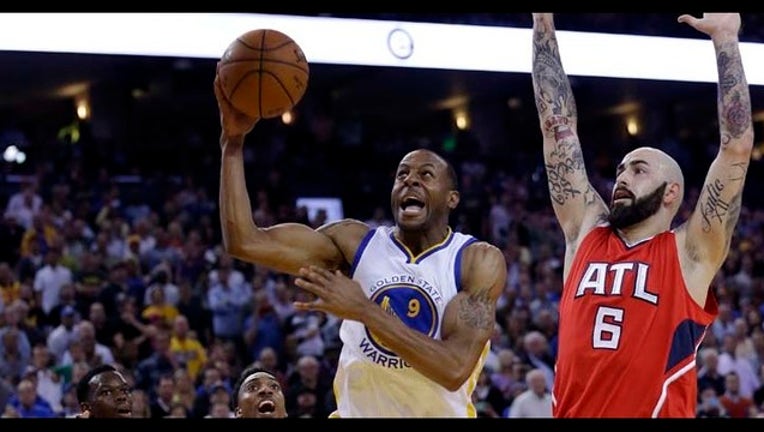 OAKLAND, Calif. (AP) — The Golden State Warriors whipped perfect passes through the lane that led to pretty shots and plenty of high-flying dunks.

Once unselfish Golden State got it going on both ends, the Hawks had a hard time keeping up in a matchup of the NBA's top two teams.

"We obviously wanted to beat them tonight because they gave us a whooping in Atlanta," Stephen Curry said. "It was a fun night."

Curry had 16 points and 12 assists, Draymond Green contributed 18 points and Andrew Bogut grabbed 14 rebounds as balanced Golden State maintained the best record in the league (54-13) with its 10th straight win at home.

The Hawks, looking fatigued and trailing big by the fourth quarter, were denied again in a chance to clinch their first division title since the 1993-94 season as Washington won at Utah.

Paul Millsap and DeMarre Carroll each scored 16 points and Carroll had 12 boards for cold-shooting Atlanta (53-15), which had won 10 of 12 and three in a row but shot 35.6 percent from the floor.

The game had a playoff-like atmosphere and was billed by some as a potential NBA Finals matchup, but Warriors coach Steve Kerr won't go there. It's way too soon.

The Warriors certainly look ready for a long postseason run, showing off snazzy passing while winning their third straight and 10th in 12 games, in front of a rocking sellout crowd of 19,596 at Oracle Arena.

"What I take away from it is the number of players who made an impact," Kerr said.

Two days after Golden State clinched a playoff berth for the third consecutive season, the Warriors scored 44 baskets on 39 assists. It was the 25th time this season Golden State had 30 or more assists.

Both teams played short-handed. The Warriors were without All-Star guard Klay Thompson, who sprained his right ankle Monday against the Lakers and will be re-evaluated in seven to 10 days.

Hawks star Kyle Korver is likely out at least another game after breaking his nose in a win against the Lakers on Sunday. Ex-Warrior Kent Bazemore moved into Atlanta's starting lineup.

The Hawks beat the Warriors 124-116 at home on Feb. 6, knocking down 15 3-pointers and forcing key turnovers late. Atlanta was held to eight 3s on Wednesday.

"Any time you're playing teams with the better records in the league, you're going to be tested, you're going to be challenged," Hawks coach Mike Budenholzer said. "And you kind of want to rise to that. You want to meet that test. Tonight wasn't our best showing."

Golden State had five turnovers — four in five possessions — by the 7:57 mark of the first quarter, including three steals by Jeff Teague as the Hawks turned those mistakes into seven early points despite starting 6 for 17.

But the Warriors warmed up in a hurry.

"It's a skill. You have to really teach it and drill it and make sure everybody's on the same page," he said. "Because it has to be a five-man deal to have the right spacing and to have the right mentality to do it. Personnel's obviously a part of that, too."

Hawks: Atlanta was outshot 58.5 percent to 34.1 percent in the first half and trailed 59-47 at halftime. ... The Hawks lost their third straight in Oakland. ... There's no timetable for the return of Thabo Sefolosha (calf), and Budenholzer said F Mike Scott (broken toe) is still in the evaluation stage. ... Al Horford, who rested the previous game, missed his first six field goal tries before scoring with 9:12 remaining in the second quarter. He was 1 for 11 in the first half.

Warriors: Golden State has just five losses vs. the Eastern Conference. ... Thompson missed only the fourth game of his four-year career. This was a game he wanted to play. "It'll be difficult, but I'm looking at the big picture," Thompson said before the game. ... The Warriors are 31-2 at home, matching their second-most wins ever. The club record of 36 home wins was set in 1975-76. ... Kerr called late teammate Jack Haley, who died Monday at age 51, "one of the most colorful characters I've ever been around."

Hawks: At Oklahoma City on Friday.