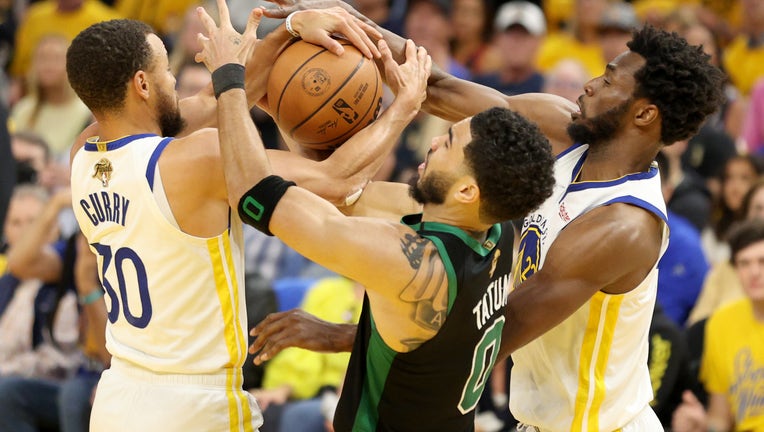 SAN FRANCISCO, CALIFORNIA - JUNE 13: Jayson Tatum #0 of the Boston Celtics competes for the ball against Stephen Curry #30 and Andrew Wiggins #22 of the Golden State Warriors during the third quarter in Game Five of the 2022 NBA Finals at Chase Cente

SAN FRANCISCO - The Golden State Warriors dominated on Monday night in Game 5 of the NBA Finals, winning the game against the Boston Celtics 104 to 94.

This now means the Warriors hold a 3-2 advantage.

The star of the show was Warriors forward Andrew Wiggins who had a phenomenal performance, finishing with 26 points and 13 rebounds.

Exhibiting a determined confidence and grit all evening, Wiggins drove through the lane for an emphatic one-handed slam with 2:10 left to cap his brilliant performance on both ends.

Stephen Curry of the Warriors contributed 16 points and eight assists but the all-time 3-point leader’s NBA-record streak of 132 straight postseason games with at least one 3 ended, along with his NBA-best run of 233 consecutive games with a 3 between regular season and playoffs combined.

The best-of-seven series resumes in Boston on Thursday night and if the Celtics can win at home they will return to the Bay Area for a winner-take-all Game 7 on Sunday. All five games so far have been decided by 10 or more points.