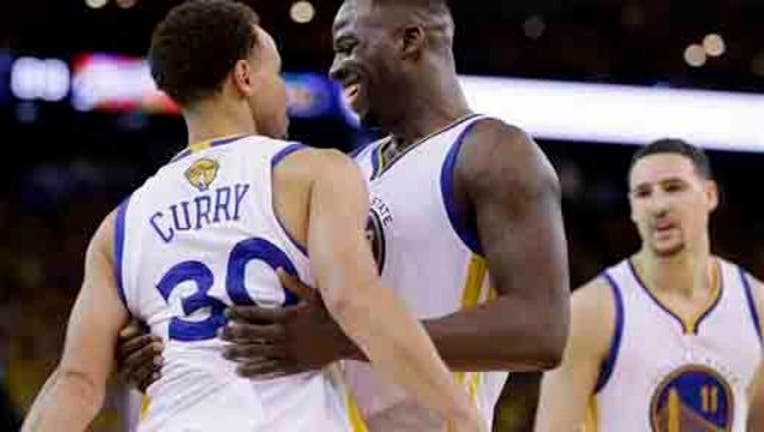 OAKLAND, Calif. (AP) No need to seek out an offer sheet in restricted free agency. Draymond Green is coming back to the Golden State Warriors on his own terms.

Green announced on Bleacher Report's Uninterrupted website Wednesday night he has agreed to a five-year deal with the Warriors. A person with knowledge of the agreement told The Associated Press the contract is worth about $85 million.

The person spoke to the AP on condition of anonymity because terms have not been disclosed. Yahoo Sports first reported the agreement.

Warriors general manager Bob Myers confirmed in a statement that the team intends to re-sign Green when the NBA's moratorium on free agency ends July 9.

Green was a restricted free agent, meaning the NBA champion Warriors could match any offer he received. But Golden State always expected to pay whatever salary he commanded, even if that meant dipping into the league's luxury tax, which it will almost surely do now.

It's a major pay raise for Green, who worked his way up from an overlooked second-round pick to the runner-up for NBA Defensive Player of the Year and a key member of the league's top-ranked defense. Green made $3.6 million total in his first three years in the league.

''It's been a long journey to get to this point, whether it's always trying to overcome the odds, overcome the doubters. To be in this position, signing long-term with the Warriors is amazing,'' Green said from his Los Angeles hotel room on the video posted on Uninterrupted.

Now they can check it off their to-do list.

Green got his shot to start this past season after David Lee injured his left hamstring in the final preseason game. He took advantage of the opportunity, receiving more first-place votes for Defensive Player of the Year than winner Kawhi Leonard of the San Antonio Spurs while playing both forward positions and center.

The 25-year-old Green averaged 11.7 points, 8.2 rebounds and 3.7 assists during the regular season. In the playoffs, he averaged 13.7 points, 10.1 rebounds and 5.2 assists, including a triple-double in the Game 6 clincher against Cleveland in the NBA Finals.

The Warriors drafted Green 35th overall in 2012 after passing on the former Michigan State standout with their first two selections. He quickly emerged as an elite defender and has rapidly improved his 3-point shooting, going from 20.7 percent his first season to 33.7 percent this past season.

The 6-foot-7, 230-pound forward played bigger than his size, giving Golden State the defensive force it had been missing next to center Andrew Bogut. Green stretched the floor alongside Curry and Thompson, and those around him raved about intangibles that don't show up on stat sheets.

Warriors coach Steve Kerr repeatedly called Green the team's heartbeat and vocal leader throughout the championship run. Green came up huge in the biggest moments, too.

He helped Golden State win the NBA title for the first time since 1975 when he had 16 points, 11 rebounds, 10 assists, three steals and one block in the clinching win at Cleveland on June 16.

Green's signing means that Lee will likely be on the way out - if the Warriors can find a trade suitor - to limit the team's tax hit. Lee is owed $15.4 million next season in the final year of his deal.