Golden State Warriors' Draymond Green was fined an undisclosed amount for punching a teammate during practice last week. He won't be suspended and is expected back on the court this week.

SAN FRANCISCO - Preseason basketball is back at the Chase Center in San Francisco and that means the return of the champions, the Golden State Warriors. But one Warrior was not on the court on Tuesday.

Star-player Draymond Green, who was seen on video, punching teammate Jordan Poole in the face during practice last week, was fined for his actions, but will not be suspended by the team.

We have learned Green will be back at practice on Thursday. There was late word from Warriors head coach Steve Kerr on Green's punishment in response to the punch. "This is the biggest crisis we've had here since I've been coach. Really serious stuff," Kerr said.

"We feel like we have a great feeling for our team a lot of continuity on this team," Kerr said following the preseason game where the Warriors defeated the Trail Blazers 131 to 98. "We feel like this is the best way for us to move forward…never easy…not going to be perfect."

Green will also play in the final preseason game at Chase Center on Friday. The amount of Green's fine is undisclosed.

Fans at Chase Center had mixed emotions about the situation. Everyone we spoke with said Green was wrong for what he did, but there were different reactions as to how it should be handled. Still, there was a lot of love for Green at the sold-out arena.

Fans said they're hoping the energy on Tuesday would be a preview of another winning season.

But along with the anticipation of a new season, is the uncertainty that has followed after someone leaked video of Green confronting Pool, Pool shoving Green and then Green punching Pool. 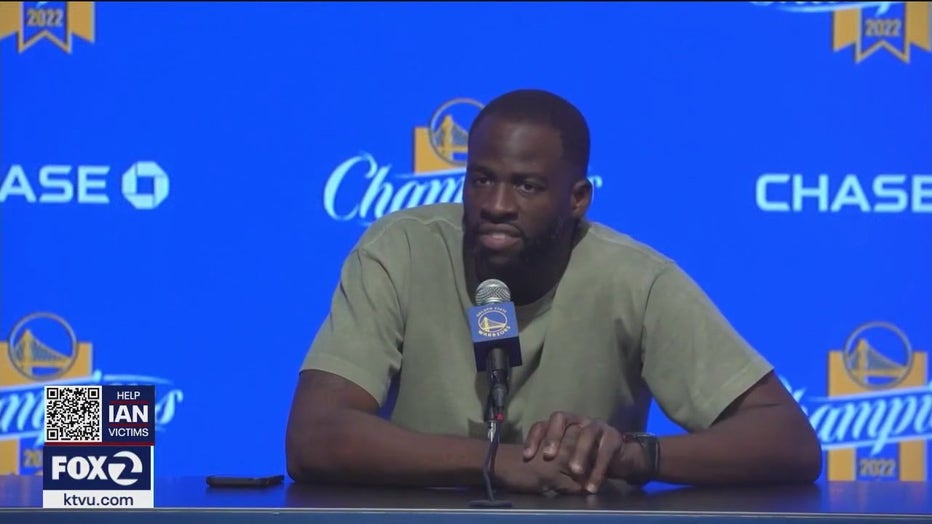 "Maybe they should trade him because he's done this too many times," said season-ticket holder Gary Dutton of Petaluma. "He's caused a lot of problems in the past and this is just one more thing."

"He needs to be a leader. What he did that day wasn't being a leader," said Ivan Ruiz of San Francisco.

"I think it sets a bad example," said Rod Green of Rohnert Park. "I felt really bad when it happened, watching it. It hurt me inside because a lot of kids, young and old look up to him. Come on, you're a better man than that, Draymond. You can do better."

SEE ALSO: Draymond Green taking time away from the Warriors after punch

Still some fans were loyal to number 23.

"He's done so many things for the franchise. Not a good look, but still love the player," said Anthony DeLaurenti of San Francisco.

Members of a Martinez family said they're Warriors fans and love Green. The dad said he didn't let his 11-year-old son watch the video, but he's aware of it. "It happens in the heat of battle when it comes to basketball and sports. We just wish it didn't happen on video," said Cameron Marshall.

"I don't think that should happen. I think they can work out their differences," said Cayden Marshall.

Others said Green is a great player and would like to see him stay with the team.

The ring ceremony will be held next Tuesday when the regular season starts.