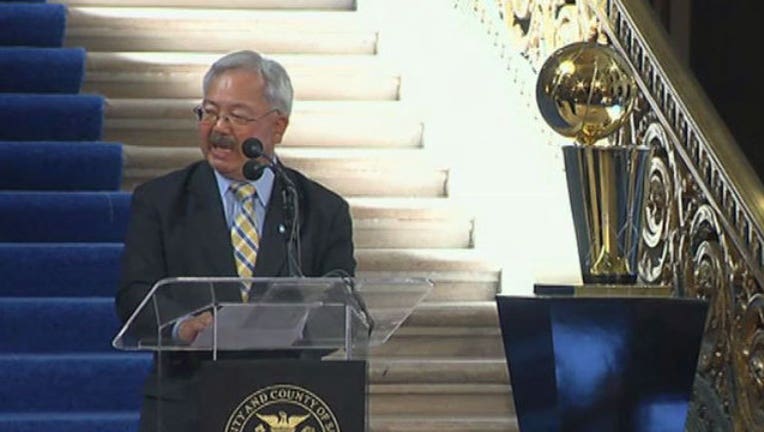 SAN FRANCISCO (BCN) - San Francisco Mayor Ed Lee presented NBA 2015 Champions, the Golden State Warriors, a key to the city to Wednesday following their winning season and in celebration of the new season, which begins on Oct. 27.

While the Warriors continue to play at the Oracle Arena in Oakland, plans for the team to move to a proposed stadium in San Francisco's Mission Bay neighborhood, had San Francisco Mayor Ed Lee proclaiming in San Francisco City Hall that, "This is Warriors ground."

Lee, one of the strongest proponents of the 18,000-seat multi-use indoor arena said Wednesday that the there has been many twists and turns since he invited the team to the city three years ago.

Originally proposed at Piers 30-32, between the Bay Bridge and the AT&T Park, the arena would have required a vote to allow for height increases on the waterfront development.

Faced with opposition, the Warriors franchise scratched that idea and has since purchased land from Salesforce.com near 16th and Third streets, across the street from the newly-built University of California at San Francisco Medical Center and just south of AT&T Park.

That location, however, has sparked concerns that there will be too much traffic congestion near the new UCSF Medical Center.

A Draft Subsequent Environmental Impact Report (SEIR) prepared by the city's Office of Community Investment and Infrastructure (OCII) found that "implementation of the proposed project would lead to significant, unavoidable project-level and/or cumulative impacts related to transportation and circulation, noise, air quality, wind, and utilities and service systems."

If the OCII Commission finds that the Final SEIR complies with the California Environmental Quality Act, it will certify it and then use that information in taking approval actions on the project.

The commission members of the OCII are appointed by the mayor, subject to confirmation by a majority of the Board of Supervisors, leaving some critics skeptical that the commission will be a fair judge on the matter.

The concerns expressed by UCSF personnel have been assuaged and a preliminary agreement has been reached with the university, creating a special transportation improvement fund for the neighborhood and placing a limit on events at the arena in special circumstances.

The details of the agreement were not immediately released to the public.

Lee said last week after UCSF announced their endorsement of the proposed arena, "I'm happy to announce that we've reached a consensus on the most critical issues, and now we're ready to move forward -- together."

Lee expressed his enthusiasm today to see the Warriors come to the city, saying he is looking forward to their 2018-19 season in San Francisco.

The presentation of the key to the city, which has previously been bestowed to the San Francisco Giants baseball team following their championship season, coincided with the Warriors' Get Fit launch at Civic Center Plaza.

Warriors player Klay Thompson and Draymond Green, along with Warriors president Rick Welts accepted the key to the city from the mayor.

Outside City Hall, at Civic Center Plaza, children participated in games and a junior NBA clinic in which they got an opportunity to play with Warriors players.