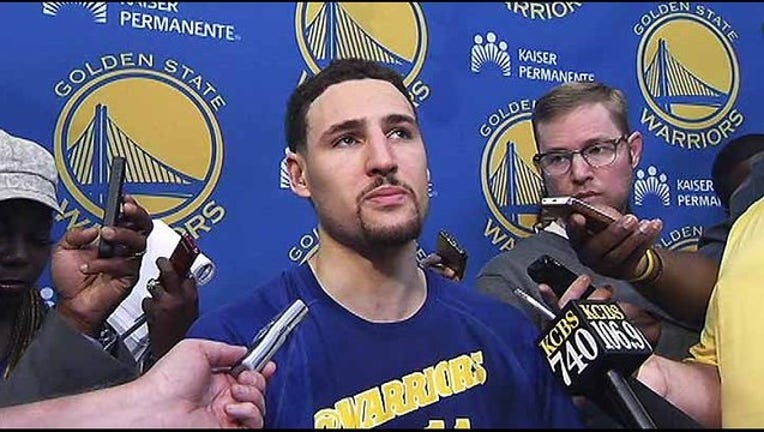 OAKLAND, Calif. (AP) — Golden State Warriors guard Klay Thompson is one step away from being cleared to play in the NBA Finals.

Thompson returned to practice Monday, a major step in the All-Star shooting guard's recovery. Thompson said he feels great and is just waiting on final clearance from doctors under the NBA's concussion protocol to play in Game 1 against the Cleveland Cavaliers on Thursday night.

"I expect to be (cleared)," Thompson said. "I'm well on my way there. I haven't been cleared yet, but I fully expect to be in the next couple days."

So long as Thompson remains symptom free, the team said he will be cleared to play in the finals.

Thompson suffered a concussion after getting kneed in the head by Houston's Trevor Ariza in Golden State's Western Conference finals clinching win Wednesday night. Team doctors initially cleared Thompson to return to the game. He ended up not playing, and the team said he started developing symptoms after the game.

Thompson's father, former NBA player Mychal Thompson, had to drive his son home because he was feeling ill — including vomiting a couple of times. He also needed stitches on his right ear after the hit caused blood to spill down the side of his head.

"It looked much worse than it was," Thompson said. "Honestly, I only had one tough night, and that was the night of the game. I just had a headache until I went to sleep. But I woke up the next morning feeling all right. I got a good breakfast and I felt great, honestly. It was just that night of the game that my head was just a little shook."

Thompson said he passed initial concussion tests and felt fine, including during his interview on the ESPN broadcast. He said doctors told him it was common for symptoms to show up later after another test confirmed the concussion.

"It might have been because of my adrenaline. I was so excited because we played so well," he said. "Honestly, I felt great through the celebration and everything. And then a couple hours after the game I just had a little headache and felt a little woozy."

He said Ariza told him after the game the hit wasn't intentionally — and Thompson didn't think it was, either. He said he has watched the play a few times.

It was the second time Thompson has been concussed. He said his first concussion came during his freshman year of high school.

"I knew it wouldn't take me more than a few days to get back to normal," Thompson said. "The last one I got was worse than the one I got last week. To me, I think it was mild. It wasn't real severe. But it's perfect timing having a week off to get fully healthy."

Thompson missed practices Friday and Saturday and the team was off Sunday, when he sat in the stands at the Coliseum watching the Oakland Athletics beat the New York Yankees 3-0. He had done some running and shooting before going through every part of Monday's practice, including a five-on-five scrimmage.

Teammates said he looked great, and they didn't miss a chance to tease Thompson for his always stoic demeanor.

Warriors coach Steve Kerr reiterated he believes Thompson will start in Game 1. He had said Saturday that he had not even been preparing to play without him.

In other injury news, Kerr said backup center Festus Ezeli returned to practice after sitting out Saturday with an illness. Reserve forward Marreese Speights, who missed all of the conference finals with a strained right calf, also participated in practice, Kerr said.