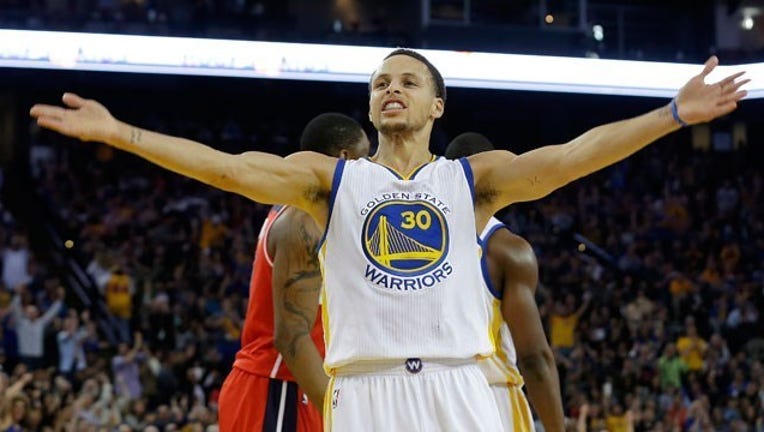 OAKLAND, Calif. (AP) — Stephen Curry had 24 points, and the Golden State Warriors used a smothering defensive effort in the third quarter to pound the Washington Wizards 107-76 on Monday night.

The Warriors held the Wizards without a field goal for nearly 11 minutes after halftime, with Washington missing its first 15 shots. Golden State outscored the Wizards 29-8 in the quarter to take a 24-point lead.

Curry also had six assists and five rebounds as the NBA-leading Warriors (57-13) moved closer to securing the league's top playoff seed. Golden State has a huge lead over Memphis (50-21) in the Western Conference and is pulling away from East-leading Atlanta (53-17) as well.

It was a season low in points for Washington, which has lost three in a row.

Bradley Beal scored 12 points, and John Wall finished with 11 points, five assists and five rebounds for the Wizards, who shot 33.3 percent. Washington was down just three at the half before falling apart.

Then again, so have a lot of teams at Oracle Arena.

Draymond Green had 13 points and Andrew Bogut grabbed 12 rebounds, helping the Warriors complete their second 6-0 homestand of the season. They are an NBA-best 34-2 at home, where sellout crowds are rocking road teams nightly.

As the Wizards (40-31) continued to miss shots in the third quarter, theWarriors were able to get out in transition. Curry connected on three 3s in the quarter to cap Golden State's surge.

Kevin Seraphin, who had 12 points and eight rebounds, hit a hook shot with 1:02 to play in the period for Washington's first — and only — field goal. The Wizards went 6 for 10 on free throws in the quarter.

It was the second time in a month the Warriors held an opponent to one made basket in a quarter. Toronto shot 1 for 19 in the first quarter of Golden State's 113-89 win Feb. 27.

Washington contained Golden State for most of the first half, holding theWarriors to just 39 percent shooting. The Wizards also had a huge advantage inside after Bogut appeared to tweak his left ankle going for a rebound in the first quarter. He went to the locker and returned late in the second quarter.

Warriors guard Klay Thompson started after missing the last three games with a sprained right ankle. The All-Star had eight points and three rebounds in 18 minutes.

Wizards: Washington's 97-77 loss to Minnesota on Feb. 25 was its previous low in points this season. ... Wall surpassed 700 assists for the season. He's the first player in franchise history to have at least 700 assists in consecutive seasons since Rod Strickland during the 1996-97 and 1997-98 seasons.

Warriors: At Portland on Tuesday.