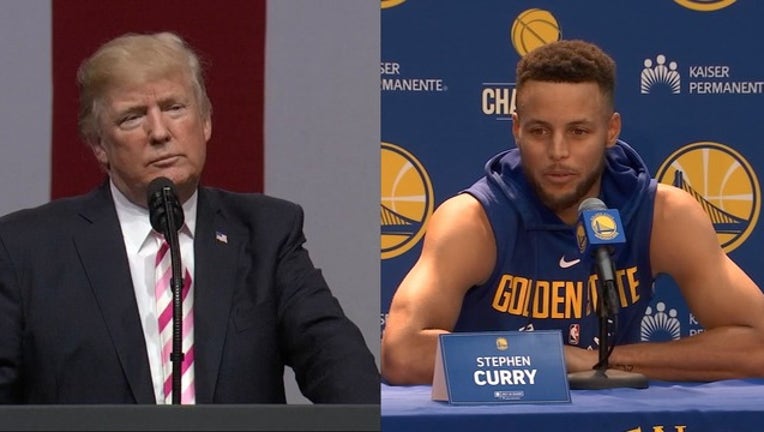 The Warriors head to Washington D.C. to face the Wizards Feb. 27 and will spend time with local kids at an undisclosed location, as they will not be visiting the White House. Feb. 22, 2018.

OAKLAND, Calif. (KTVU) - President Trump tweeted last September that the Golden State Warriors’ invitation to the White House was “withdrawn.” When the defending champions face the Wizards in Washington D.C. Feb. 27 -- their lone visit of the season -- they will instead visit local kids at an undisclosed location, according to ESPN.

Warriors players had indicated they were opposed to visiting the White House -- a United States tradition for champions – due to some of Trump’s conservative agenda. Head Coach Steve Kerr supported his guys. At their annual media day before the start of this season, Stephen Curry had noted that visiting the nation’s capital would be an implied approval of the President’s policies.

"And by acting, or not going, hopefully that will inspire some change when it comes to what we tolerate in this country and what is accepted and what we turn a blind eye to," the two-time MVP said.

And then, before the team made a formal decision, Trump took to Twitter and said they’re no longer welcome, citing Curry’s hesitation and noting that the “White House is considered a great honor for a championship team.”

Three time champion LeBron James responded to the president’s announcement and offered his take in a Tweet that was liked 1.5 million times. James called the president a “bum,” saying that Curry had already suggested he was not going and that revoking the invite was unnecessary.

Kerr continues to support what the team decides to do during their visit. He recalls that their invitation taken from them and it’s their decision what they decide to do.

"I want the players to have a good day and to do something positive and to enjoy what they're doing," Kerr said, per ESPN.

The Warriors return from the All-Star break Thursday when the host the Los Angeles Clippers at Oracle Arena at 7:30 p.m.