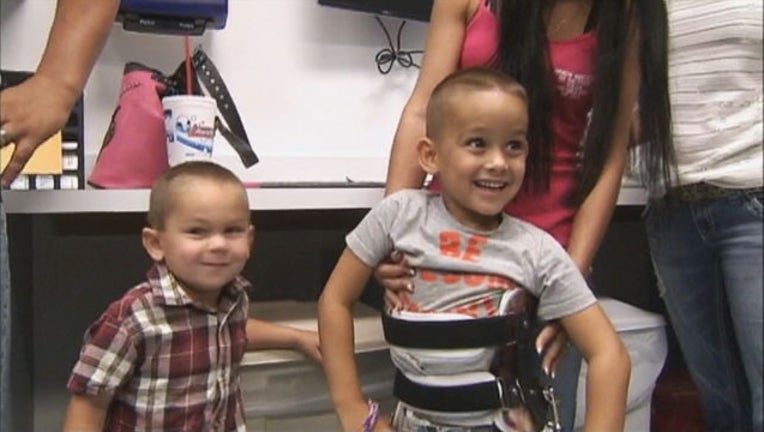 TAMPA, FL (WTVT) -- Bryce Santoro was all smiles as he wheeled into the Shriners Hospital lobby Tuesday morning.

He had big plans to “be awesome today,”- as his shirt conveyed. That’s because for the first time in his life, he would stand, and take his first steps.

The 5-year-old was born with health challenges- two club feet and spina bifida. Being paralyzed from the waist down kept him from ever standing on his own.

Tuesday, however, that all changed.

After three years of intense therapy at Shriners, doctors presented him with the equipment he needed to stand tall.

Family members and doctors crowded around as he got suited up, and then the moment came. Bryce stood, and with a little help from doctors, he inched his way into the arms of his loved ones.

The smile he’d been wearing since he arrived to the hospital grew even wider, while the faces of those around him filled with pride…and happy tears

It was the day they’d all been waiting for, and it was perfect.

“I can’t say enough good things about him, and how strong and tough he is,” said Bryce’s father, Jesse Santoro.

It took a lot of hard work to make this happen, but Jesse said his son maintained inspiring determination through it all.

"If Bryce wants to do it, he'll figure out a way to do it. It's actually really inspiring for me and for everyone else that knows him,” he said.

As for Bryce, he said his big milestone made for “the best day ever!”