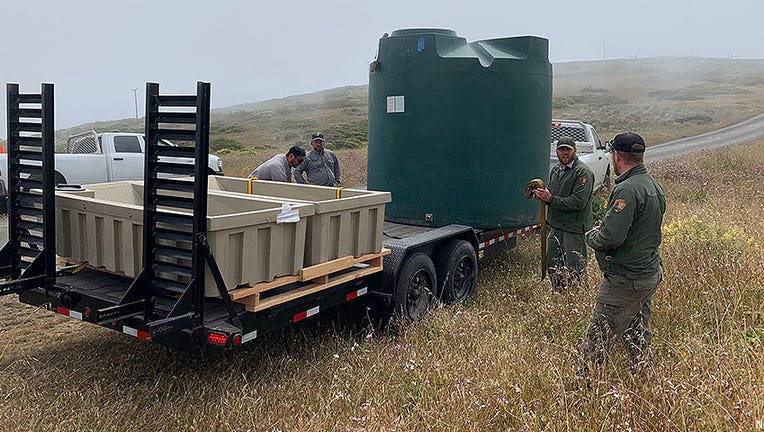 POINT REYES NATIONAL SEASHORE, Calif. - Creeks and springs at Point Reyes National Seashore haven't completely dried up but they're looking parched enough that park staff set up three large troughs last week to ensure tule elk herds get enough water to make it through what could be an unprecedented drought.

The 250-gallon troughs at the south end of the Tomales Point Tule Elk Reserve will stay in place at least until rains return next winter, National Park Service officials said.

Some water sources are sill available to the rare elk, since Tomales Point has both man-made cattle stock ponds and seeps, springs and creeks. Many of the stock ponds are already dry, however, and other sources are drier than normal -- conditions that are usually expected at the end of summer, not the beginning.

Marin County declared a drought emergency last month, with the lowest rainfall during the last 16 months in more than 140 years recorded by the Marin Municipal Water District.

The gravity-fed water troughs set up for the elk are replenished by 2,000-plus gallon tanks located along Pierce Point Road. The troughs have float valves to maintain water levels, and escape ramps to prevent accidental drowning of smaller wildlife. Water will be supplied from water systems within and possibly outside the park, park officials said.

There are nearly 600 tule elk in the park -- a fenced herd of tule elk at Tomales Point and two free-ranging herds in the Limantour and Drakes Beach areas, park officials said. There are about 6,000 tule elk throughout California.

The park service developed the water project for the elk in tandem with the California Department of Fish and Wildlife and the Federated Indians of Graton Rancheria, and with support from the Marin Municipal Water District, which is supplying two of the water tanks.