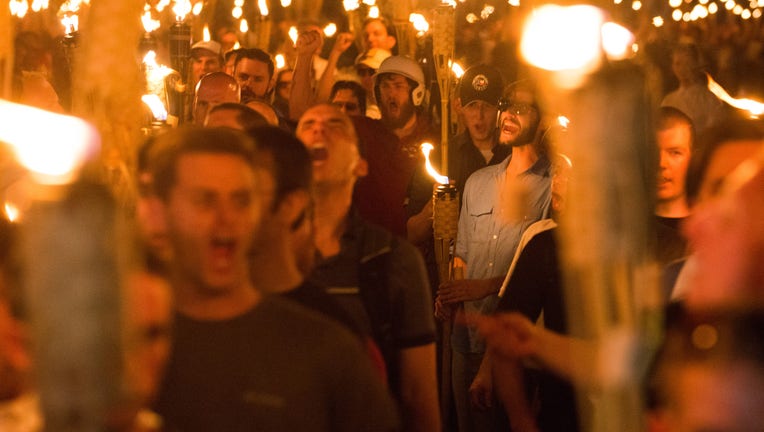 Neo Nazis, Alt-Right, and White Supremacists take part a the night before the 'Unite the Right' rally in Charlottesville, VA, white supremacists march with tiki torchs through the University of Virginia campus. (Photo by Zach D Roberts/NurPhoto via G

Police and local leaders in several cities across the U.S. were bracing for "White Lives Matter" events that were reportedly planned for Sunday, according to reports.

The expected events raised the possibility of clashes between event participants and groups who oppose them, as well as between the groups and law enforcement, Forbes reported.

Huntington Beach, California, was expected to be a primary location, with a 1 p.m. PT rally there said to be organized by a Ku Klux Klan group, according to the magazine.

Similar demonstrations were expected in cities such as Fargo, North Dakota; Raleigh, North Carolina; Columbus, Ohio; and Albuquerque, New Mexico, according to Forbes.

Lt. Brian Smith of the Huntington Beach police said the force had not yet been able to confirm that a rally would actually take place, the Los Angeles Times reported.

The concerns were raised after some KKK fliers were distributed recently in Huntington Beach and nearby towns, the Times reported.

Huntington Beach officials have planned a "Day of Unity" event to counter any planned KKK demonstration, according to the newspaper.

Groups speaking out against the expected events included the Anti-Defamation League’s Center on Extremism and a group of California Democratic lawmakers from Orange County, where Huntington Beach is located, the Forbes report said.