A rafter of 30 wild turkeys on the NASA Ames campus is destroying property, acting aggressively, and creating unhygienic problems. The fowl are set to be removed to an ecological reserve in Santa Clara County.

Of all the secrets and head-scratchers kept on the secure grounds of the NASA Ames campus, This is hard to figure, even for rocket scientists.

An uninvited and unwanted guest now claims part of this space as its roost.

"This is kind of a unique situation," said California Department of Fish and Wildlife spokesman Ken Paglia.

Upwards of 30 wild turkeys are currently roosting on the grounds, he said.

NASA Ames officials sent pictures of the fowl, which by all accounts are acting foul. They’re destroying property, displaying poor hygiene, and then there are problems related to mating season aggression. 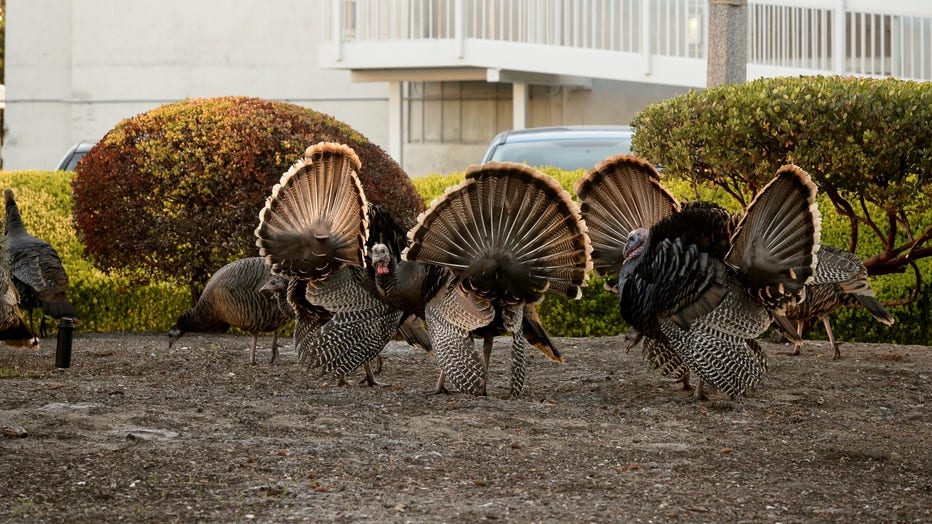 "While they currently pose minimal impact to the NASA community, biologists are humanely trapping and relocating them to an ecological reserve in Santa Clara (County) to roam freely," NASA said in a statement to KTVU. "This measure protects the safety and well-being of the turkeys, as well as the Ames community and workforce."

Officials said this isn’t the first time wild turkeys have tried a takeover here. But this year, the numbers are greater, and the impacts more noticeable.

Professional trappers working for the U.S. Department of Agriculture will catch the turkeys, then test them for disease. NASA will transport them to their new home at a reserve, south of Livermore, in Santa Clara County.

"The plan is to take the turkeys to the San Antonio Valley Ecological Reserve," said Paglia. "It’s about three thousand acres or an ecological reserve. There’s already a small population of turkeys there. and it’s a turkey habitat. They have food, water, and everything a turkey needs."

Officials said they are usually reluctant to transplant one problem to another location. But considering the important work done at NASA Ames, and neighboring Moffett Field, these birds will soon be traveling east -- provided they can be caught.

"Turkeys are clever and they’re faster than you think. So that not easy to catch," said Paglia.

Officials said if all goes well, the turkeys will be caught, tested, and transported by the week of Feb. 14-18.