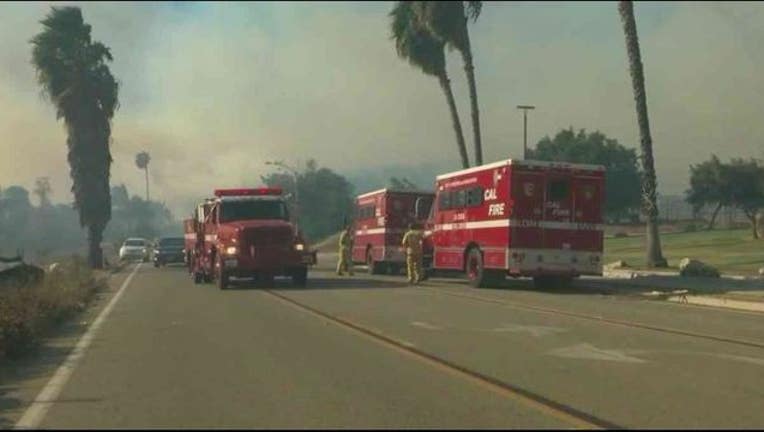 The fire exceeded 6 square miles (16 square kilometers) in a matter of hours and tore through the tightly packed Rancho Monserate Country Club community in the small city of Fallbrook, known for its avocado orchards and horse ranches. Three people were burned trying to escape the flames, said Capt. Nick Schuler of the California Department of Forestry and Fire Protection.

The destructive blaze broke out as firefighters tried to corral the largest fire in the state that was burning around Ventura -- 130 miles (209 kilometers) to the north -- and destroyed 430 buildings as it grew to 180 square miles (466 square kilometers) since Monday. Fire crews also fought large fires around Los Angeles, though they made enough progress to lift most evacuation orders.

Like other fires that have broken out this week, Fallbrook has a history of destructive blazes. Ten years ago, as a series of similar fires raced across Southern California, a blaze in Fallbrook injured five people, destroyed 206 homes and burned 14 square miles (36 square kilometers).

Driven by winds above 35 mph (56 kph), Thursday's fire wiped out rows of trailer homes in the retirement community and left behind charred and mangled metal where they had stood.

The fire started from an unknown cause next to State Highway 76 and blew across six lanes to the other side. The highway was closed Thursday night.

Evacuations were ordered in the area near the Camp Pendleton Marine Corps Base and schools and casinos were being used as shelters.

Jim Peratt was in Las Vegas on business when his wife called and said she was rounding up their two horses and evacuating their property in Bonsall, a community of 4,000 amid the rolling hills of rural San Diego County.

"She saw nothing but smoke and flames all around," Peratt said. "I'm praying I'll have a home when I get back."

As the flames approached the elite San Luis Rey Downs training facility for thoroughbreds, many of the more than 450 horses were cut loose to prevent them from being trapped in their stables if barns caught fire, said Mac McBride of the Del Mar Thoroughbred Club.

Horse trainer Scott Hansen said he knows that some of his 30 horses at the facility died.

"I don't know how many are living and how many are dead," he said. "I guess I'll have to figure that out in the morning."

Most of the horses were saved, McBride said, and were being loaded to go to the Del Mar Fairgrounds.

The fire and a smaller one 12 miles (19 kilometers) north in the city of Murrieta broke out the day after state officials sent an unprecedented alert to cell phones across seven Southern California counties warning that strong Santa Ana winds could cause extreme fire danger. Although hurricane-force winds predicted did not materialize, firefighters faced gusts that fanned flames and put thousands of homes in jeopardy.

Along the coast between Ventura and Santa Barbara, tiny beach communities were under siege as fire leapt from steep hillsides across U.S. Highway 101.

"We drove through a wall of flames," Wendy Frank said, describing her ordeal after evacuating her horses from Ojai on Wednesday night. "I didn't know if we'd make it. I just put the accelerator down. I know we were going over 100 mph (160 kph), we could have been going much more, and just hoped for the best."

Fires flared up Thursday along the highway, forcing an evacuation of dozens of homes at Faria Beach.

Joseph Ruffner had left earlier in the week but returned and said he was staying put this time.

"This morning there was a wall of fire back right over here," he said. "I didn't think it was no big deal, but it's coming back to burn what it didn't burn yesterday."

The highway, which runs the length of the state and is a major commuter corridor to Los Angeles, was closed intermittently along the 28-mile (45-kilometer) stretch between Ventura and Santa Barbara.

The Ventura and LA-area fires have put tens of thousands of people under evacuation orders and destroyed nearly 200 homes and buildings, a figure almost certain to rise.

A woman was found dead in a wrecked car in an evacuation zone near the city of Santa Paula, where the Ventura County blaze began Monday night, but officials could not immediately say whether the accident was fire-related.

Most of Ojai's 7,000 residents were warned to clear out late Wednesday and patients unable to walk were moved from the Ojai Valley Community Hospital because of unprecedented, hurricane-force Santa Ana winds in the overnight forecast.

Ash fell like snowflakes on citrus orchards scattered around town and on Spanish-style architecture as firefighters parked their trucks around houses in anticipation of winds picking back up.

Some businesses were closed, but staples could be found at Pat's Liquor, where Hank Cheyne-Garcia loaded up with supplies to fuel through another edgy night keeping sentry on the fire.

"It got a little too intense yesterday with the wind kicking up," he said. "There was just so much smoke. Yesterday you couldn't see the street."

For complete coverage of the California wildfires, click here: https://apnews.com/tag/Wildfires