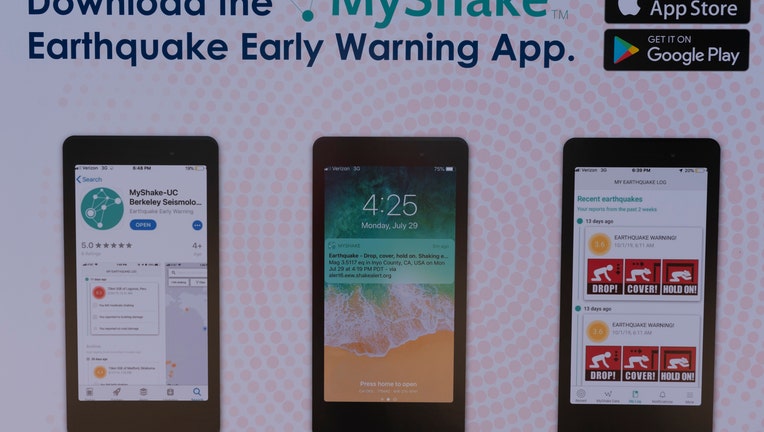 SALEM, Ore. - People in Oregon will be better prepared for earthquakes — particularly important in the Pacific Northwest because experts say "the big one" is coming — as an early warning system launched Thursday, the 10th anniversary of a devastating quake and tsunami in Japan.

California already has the system, while Washington state will join in May to complete coverage of the West Coast. The ShakeAlert system operated by the U.S. Geological Survey uses seismographic sensors to detect significant earthquakes quickly so alerts reach smartphones and people can seek cover before the shaking starts.

"It’s very important that (the three states) are all partners in ShakeAlert, because earthquakes don’t respect geographic boundaries, and we have huge population centers all across the West Coast where earthquake risk is the highest in the contiguous U.S.," said Gabriel Lotto, ShakeAlert user engagement facilitator for the Pacific Northwest Seismic Network.

Earthquakes in the Cascadia subduction zone, which extends from the ocean off Northern California to Canada’s Vancouver Island, have an average magnitude of around 9, making them among the world’s biggest.

A quake in that zone has a 37% probability of happening off Oregon in the next 50 years, with a slightly lower chance of one striking near Washington state, according to Chris Goldfinger, an Oregon State University professor and earthquake geologist.

The system cannot predict an earthquake but can give people a jump on seeking cover from falling objects and time to brace themselves.

When an earthquake is detected, people who have alerts activated on their smartphones will get a message saying, "Earthquake detected! Drop, cover, hold on. Protect yourself." Mobile apps also carry the alerts.

Jenny Crayne of the Oregon Museum of Science and Industry told reporters Wednesday that the system works by detecting an initial wave sent out by an earthquake.

"The P wave is first and fast. It travels out and ahead of the S wave, and it is not producing the shaking," Crayne said. "The S wave is slower and second, and it’s the one that produces the real shaking and damage that you experience during an earthquake."

The system's sensors can rapidly detect that initial P wave and send that data to a processing center, where algorithms can determine and estimate the geographical extent of the earthquake, the magnitude and the expected shaking intensity in different areas, Crayne said.

If an area is expected to experience significant shaking, people there will receive an alert. But those at or very close to the epicenter of the quake won't receive the warning in time because the waves will be too close together.

ShakeAlert can also slow trains to reduce derailments, open firehouse doors so they don't jam shut and protect water systems with automatic shutoffs. A test of the system in Oregon is planned for the summer.

The rollout in Oregon coincides with the 10th anniversary of Japan's magnitude 9.0 quake and tsunami that killed more than 18,000 people and caused meltdowns at the Fukushima Daiichi nuclear plant.