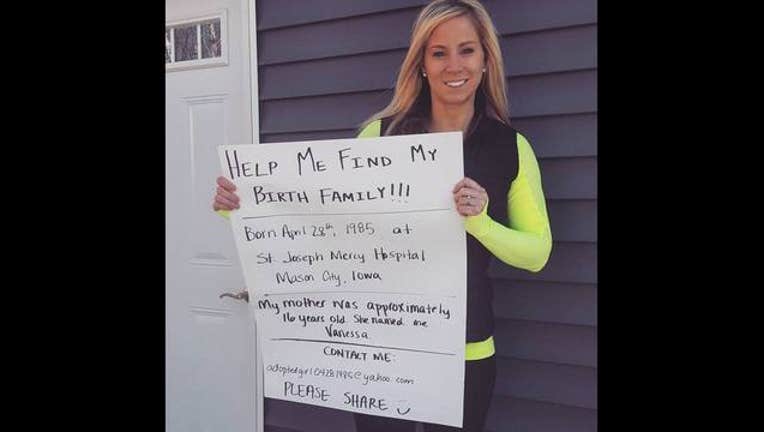 SHEFFIELD, Iowa - A woman who was given up for adoption at birth is using social media in her efforts to track down her biological parents.

30-year-old Megan Hejlik of Sheffield, Iowa has posted a picture of herself on Facebook holding a sign that reads, "Help me find my birth family."

The sign also includes the limited information she has including her birthday and what she knows of her birth mother: She was about 16 years-old and she named the baby she gave up Vanessa.

Hejlik also includes where she was born, St. Joseph Mercy Hospital, which happens to be the same Iowa hospital where she now works as a nurse.

In interviews, Hejlik says that she loves her adoptive parents and that she realizes that the choice her birth mother made was for the best.

She says that through finding her biological parents, she hopes to know more about herself and get some insight into her family history.

The mother of two also says that she wants to let her birth mother know about the important milestones that she's experienced in her life.

She's calling on anyone with leads about her biological family to contact her at adoptedgirl04281985@yahoo.com.

At last check her post has been shared almost 9,000 times.

Hejlik reacted to the outpouring of support by writing on Facebook, "Wow! I just wanted to say thank you to everyone for sharing my post. This journey hasn't been easy. I seriously thought only a handful of people would share this, but it's gone viral...and that's AWESOME!!!!"

She also writes that she has had a couple of promising leads but as of yet, there's been no match. So she calls on the public to "keep sharing!"