A woman was shot at Lake Merritt early Thursday morning, just hours after another woman was wounded less than two miles away outside the Fox Theater.

OAKLAND, Calif. - A woman was shot at Lake Merritt early Thursday morning, just hours after another woman was wounded less than two miles away outside the Fox Theater.

Oakland police spokeswoman Kim Armstead said the woman was taken to the hospital in "grave" condition. She was shot about 12: 30 a.m. in the 1400 block of Lakeshore Avenue, police said.

Authorities said a group of robbers confronted the 22-year-old woman and a man as they sat in a vehicle. The victims tried to get away, and the robbers fired at least 16 shots, hitting the woman.

A tow truck was also seen taking away a white Chevy Tahoe about 5 a.m. 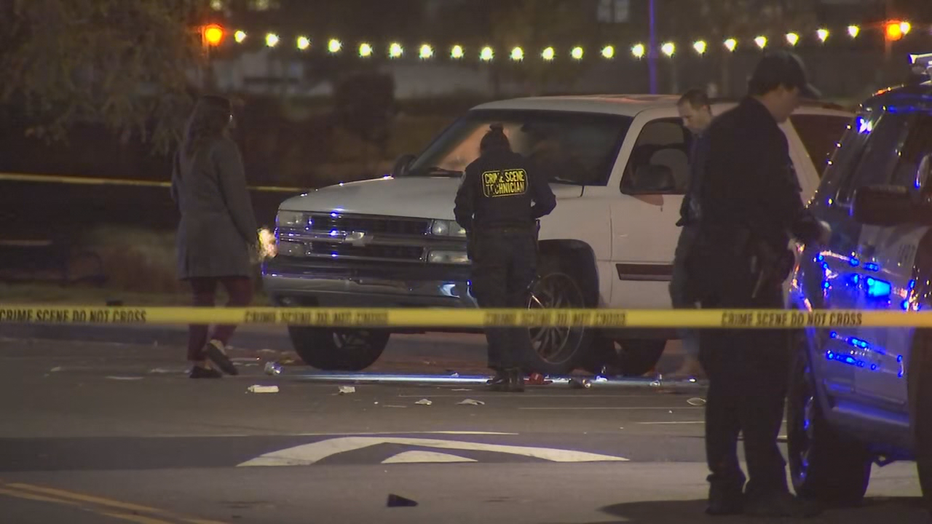 Police investigate a shooting near Lake Merritt that left a woman with grave injuries on Nov. 11, 2021. (KTVU FOX 2)

The Lake Merritt shooting comes less than 12 hours after a 33-year-old woman waiting in line with her kids to attend a concert at the Fox Theater was shot and wounded.

Police have not confirmed what caused that gunfire, but witnesses said the gun battle was between a car burglar and the car owner. People in the area heard rapid gunfire at 2:30 p.m.

Suspects fled in a car, according to witnesses, and that's when a stray bullet struck the woman in the arm. She is expected to recover.

At first, the owners of Duende, a restaurant across the street, though it was something in the kitchen. When they learned it was gunfire, they ran to help.

"We went over there because she was down and there was no one there yet," said Paul Canales, Duende's owner. "There were a few people around her so we wanted to make sure she was ok and if there was anything we could do to help. She was conscious and talking, and they had her, you know, pressed, which was right. Everything was right."

Evidence markers show at least 17 shots were fired. Some cars were hit by bullets, and the gunfire sent people running, including children from a nearby school.

The All Time Low concert was canceled in light of this afternoon's events. The pop-punk band is on tour from Maryland.

There have been no arrests in either of the shootings.

"It's draining, traumatizing on our Oakland residents," said Councilmember Loren Taylor. "What this is, is blatant disregard for human life, and that's what needs to stop. Put down the guns."

She added, "It is not acceptable. It is not OK. And you will be held accountable to shoot people amidst trafifc, at concert lines, parks, gas stations, walking."

Police haven’t released any information or descriptions of any suspects.

Concertgoer injured in shooting while waiting outside Oakland's Fox Theater

A woman was struck by gunfire in a mid-day shooting near Oakland's Fox Theater Wednesday, authorities said. Police are not confirming what witnesses are saying, that it was a gun battle that erupted after a car owner confronted people breaking into cars, including his.