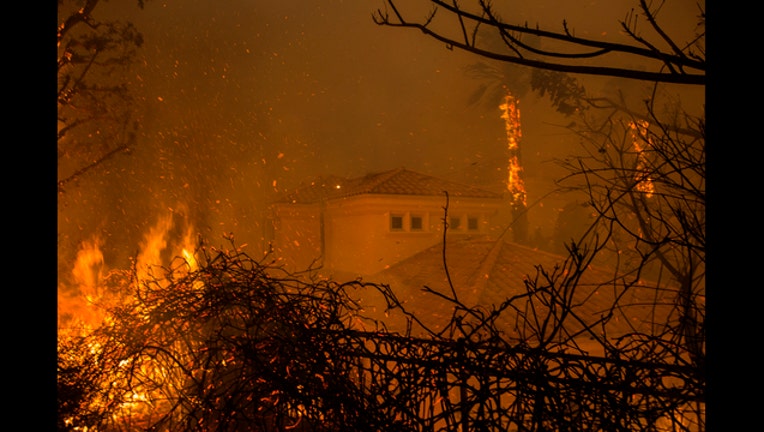 Flames surround a house during the Woolsey Fire on November 9, 2018 in Malibu, California. (Photo by David McNew/Getty Images)

MALIBU, Calif. (AP) - Two people were found dead and scores of houses from the celebrity mansions of Malibu to the mobile homes of seniors in the suburbs burned in a pair of wildfires that stretched across more than 100 square miles of Southern California, authorities said Saturday.

The two bodies were found in a sparsely populated stretch of Mulholland Highway in Malibu, but Los Angeles County sheriff's Chief John Benedict offered no further details. It brings to 11 the number of people killed in the state's wildfires in the past few days, with nine found dead in a Northern California wildfire.

Firefighters have saved thousands of homes despite working in "extreme, tough fire conditions that they said they have never seen in their life," Los Angeles County Fire Chief Daryl Osby said.

Those vicious conditions on Friday night gave way to calm Saturday, with winds reduce to breezes.

Firefighters used the lull to try to rein in the powerful blaze that had grown to 109 square miles (282 square kilometers) and get a grasp of how much damage it did in its first two days.

Osby said losses to homes were "significant" but did not say how many had burned. Officials said earlier that 150 houses had been destroyed and the number would rise. Some 250,000 homes are under evacuation orders across the region.

Fire burned in famously ritzy coastal spots like Malibu , where Lady Gaga, Kim Kardashian West, Guillermo del Toro and Martin Sheen were among those forced out of their homes amid a citywide evacuation order.

At Pepperdine University in Malibu, where flames were visible Friday, students were told not to evacuate but to take shelter in buildings. By Saturday, the flames were beaten back, and students were allowed to roam campus, university president Andrew K. Benton said in a statement.

The flames also burned inland through hills and canyons dotted with modest homes, reached into the corner of the San Fernando Valley in Los Angeles, and stretched into suburbs like Thousand Oaks, a city of 130,000 people that just a few days ago saw 12 people killed in a mass shooting at a country music bar.

Wildfire raged on both sides of the city still in mourning, where some three-quarters of the population are under evacuation orders that officials urged them to heed.

"We've had a lot of tragedy in our community," said Ventura County Supervisor Linda Parks, whose district includes Thousand Oaks. "We don't want any more. We do not want any more lives lost."

Residents couldn't believe their city, known to few outside California a week ago, could suddenly be gripped by two simultaneous horrors.

"It's like 'welcome to hell,'" Cynthia Ball said outside a teen center serving as a shelter for evacuees. "I don't even know what to say. It's like we're all walking around kind of in a trance."

At the edge of Thousand Oaks in Newbury Park at a mobile home for seniors, the fire came so quickly that residents had no time to gather medications and documents. Firefighters carried people from homes and put them in empty seats of their neighbors' cars, said Carol Napoli, 74.

Napoli left with her friend, the friend's son and her mother who is in her 90s and had to leave behind her oxygen tank.

"We drove through flames to get out. They had us in like a caravan," Napoli said. "My girlfriend was driving. She said, 'I don't know if I can do this ...' Her son said, 'Mom you have to, you have to drive through the flames.'"

Ben Watkins also drove through flames, but he was trying to get back home, not leave it.

He was headed from Santa Barbara to Los Angeles on Friday when fire brought traffic to a stop and he decided to wait it out on a beach in Malibu, watching as the blaze drew closer.

Finally, he decided to make a run for it, hopping in his vehicle and driving home through flames that lapped at the Pacific Coast Highway.

"It's survival mode," Watkins said Saturday after making it home the day before. "You're thinking about how you have to get home at all costs."

The area burning in Southern California is in severe drought, U.S. government analysts said. California emerged from a five-year statewide drought last year but has had a very dry 2018, pushing parts of the state back into drought and leaving others, like the area of the Northern California fire, abnormally dry.