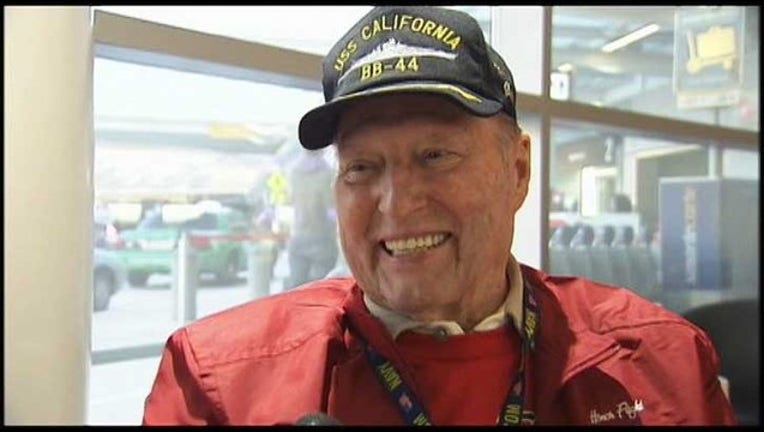 SAN FRANCISCO (KTVU and wires) – William Abbott was a bit emotional Thursday as he prepared to board a honor flight to Washington to visit the World War II Memorial.

As a young man, the Pleasanton native walked into the U.S. Navy recruiting office in San Francisco and volunteered for service.

He soon found aboard the battleship the U.S.S. California and in the midst of the War in the Pacific taking part in the invasion of Saipan, Guam, Tinian, the Philippines, Okinawa and then into Nagasaki shortly after the atomic bomb was dropped on that Japanese city.

Abbot said his crew went into the Nagasaki area to help bring out POWs from the fall of the Philippines, but that there was not much left of the city.

"We went into Japan right after they dropped the bomb in Nagasaki," he said. "Nagasaki didn't look too good."

Also on the flight was Abbott's brother Dick, who served in the Navy during the War as a mechanic on flights on submarine patrol.

"I'm very excited to go," he told KTVU Fox 2. "I thought this day would never come."

Since 2005, the Honor Flight Network has flown World War II veterans each year to see the memorial built in honor of their service.

In addition to the World War II Memorial, the veterans will visit other landmarks like the Smithsonian's National Air and Space Museum, the Women in Military Service for America Memorial and Arlington National Cemetery.