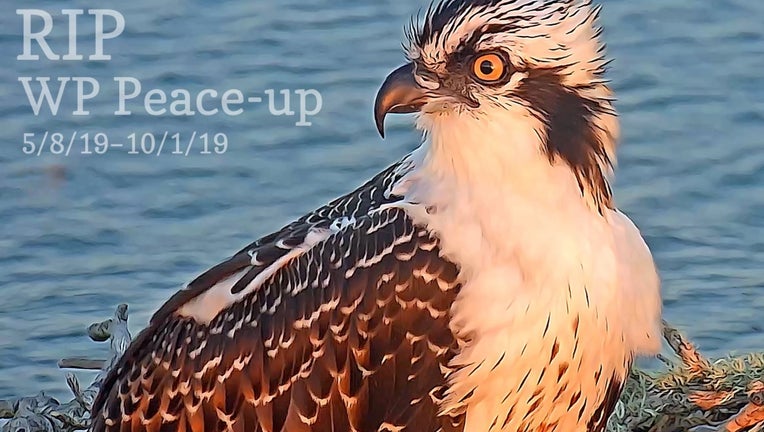 RICHMOND, Calif. - One of the osprey offspring siblings born last May at a nest next the historic SS Red Oak Victory in Richmond has died, the Golden Gate Audubon Society announced on social media Friday.

Peace-up, the oldest of three osprey fledglings born this year to parents Rosie and Richmond, was seen falling from a tree in Corte Madera on Oct. 1 and died a short time later, according to observers.

"There were no other obvious injuries that could clue us in to cause of death," wrote Teresa Ely, banding manager of the Golden Gate Raptor Observatory.

"Today we are in mourning," the Audubon chapter said in sharing the news on its Facebook page for the nest (www.facebook.com/bayospreys/).

"By the time we received this information, the bird had been buried and it is too decomposed to do a necropsy to find out any more information," Ely wrote.

Peace-up was identified after being banded on the nest by the GGRO.

Banding is used to track raptors to learn more about their movements, habits, lifespan and other aspects.

Peace-up, a male, and sister Kiskasit were the latest set of fledglings raised by parents Rosie and Richmon. A third offspring this year died shortly after birth, likely due to hypothermia, according to the Golden Gate Audubon Society.

The names of the siblings were chosen in social media voting by fans of the Richmond osprey, who have become online celebrities followed by live streams from their nest at www.sfbayospreys.org via cameras installed by the society in 2017.

The osprey nest is monitored by two HD live-streaming cameras and is perched 75 feet above the ground on a decommissioned World War II era whirley crane in Richmond's Shipyard 3.

The names Peace-up and Kiskasit are Native American words for osprey.

"The Confederated Tribes of Coos, Lower Umpqua, and Siuslaw Indians graciously suggested the words for Osprey from among their languages," the society said at the time the young birds were named. "First Peoples of southern Oregon know ospreys well and have shared their waters and landscapes with ospreys for thousands of years."

In the 1960s and '70s, osprey populations plummeted and the species was threatened with extinction when the pesticide DDT made Osprey eggshells so thin that they broke during incubation.

After the federal government banned DDT, Osprey numbers rebounded and their nesting range expanded to San Francisco Bay. Ospreys began nesting along the Bay for the very first time in the early 2000s, and in 2019 there were more than 40 active nesting pairs along the Bay.

Golden Gate Audubon on Sunday posted that one of three juveniles hatched at the nest in Richmond in 2018 had been spotted in November in El Salvador.