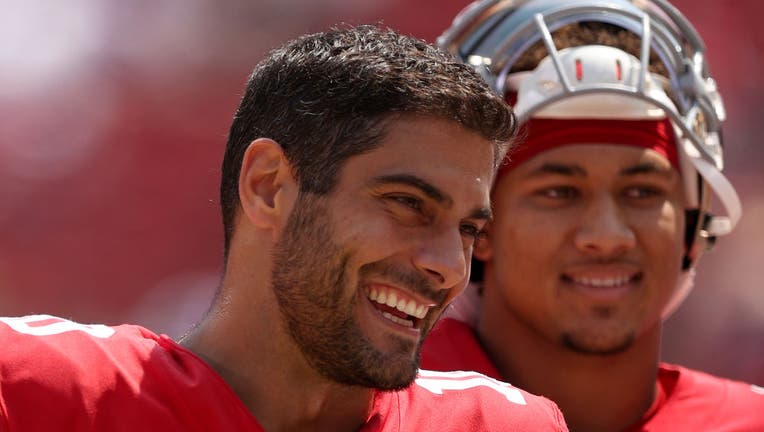 SANTA CLARA, CALIFORNIA - AUGUST 29: Jimmy Garoppolo #10 and Trey Lance #5 of the San Francisco 49ers talk to each other on the sidelines before their preseason game against the Las Vegas Raiders at Levi's Stadium on August 29, 2021 in Santa Clara, C

SANTA CLARA, Calif. - The San Francisco 49ers showed off their two-quarterback system by getting rushing touchdowns from both Jimmy Garoppolo and Trey Lance in a 34-10 exhibition victory over the Las Vegas Raiders on Sunday.

Coach Kyle Shanahan rotated his two quarterbacks on the first two drives against the Raiders backups as a tune-up for the regular season when he plans to use both Garoppolo and the rookie Lance.

Garoppolo started and was in for the first three plays before Lance entered and handed to Raheem Mostert for a 17-yard gain on a zone read play. Garoppolo returned for the next play and both QBs got five plays on that drive that ended with Garoppolo scrambling for a 1-yard TD.

The quarterback platoon continued on the next drive with Garoppolo converting a fourth-and-1 sneak before Lance scored two plays later on a keeper from 2 yards.

That ended the day for Garoppolo, who completed 4 of 7 passes for 64 yards to go with the two runs.

Lance stayed in the game until the third quarter and finished 6 for 13 for 46 yards.

The Raiders took a different approach, keeping most of their starters back home in Las Vegas. Nathan Peterman got his third straight game of extensive action. He took all but one snap in the preseason as Marcus Mariota nursed an injury and Derek Carr rested.

The only projected Week 1 starter on the depth chart who saw action for the Raiders was linebacker Tanner Muse.

Carr, tight end Darren Waller, running backs Josh Jacobs and Kenyan Drake, receivers Henry Ruggs III and Bryan Edwards, and offensive linemen Kolton Miller, Denzelle Good and Richie Incognito are among the projected starters who got no action in the preseason for the Raiders.

Mostert made his only appearance of the preseason for the 49ers and needed just one drive to show he's ready for the opener.

Mostert got seven carries on that drive and gained 53 yards before taking the rest of the day off.

BACK TO THE BAY

The Raiders made their first trip back to the Bay Area since moving to Las Vegas last year. With the move, the NFL restarted the exhibition series between the Raiders and 49ers that had been put on hold since 2011 after one man was beaten in a restroom and another was shot multiple times in the Candlestick Park parking lot.

Niners WR Travis Benjamin left the game with a concussion.

Raiders: Las Vegas opens the regular season at home vs. Baltimore on Sept. 13.