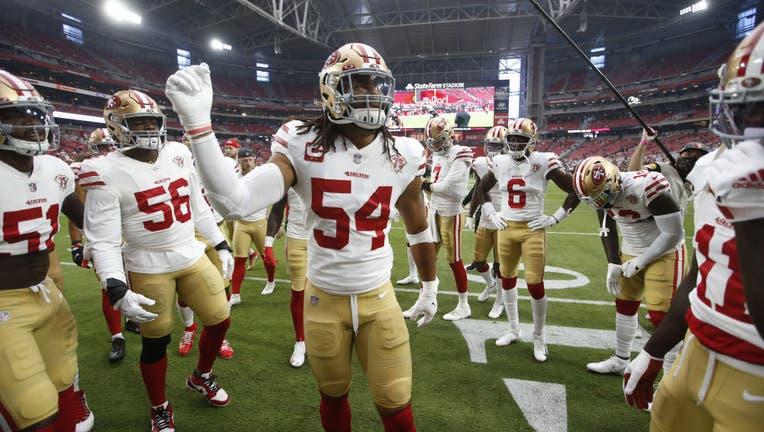 GLENDALE, AZ - OCTOBER 10: Fred Warner #54 of the San Francisco 49ers fires up the team on the field before the game against the Arizona Cardinals at State Farm Stadium on October 10, 2021 in Glendale, Arizona. The Cardinals defeated the 49ers 17-10.

SANTA CLARA, Calif. - The San Francisco 49ers return from a bye week looking to snap a three-game losing streak when they host the Indianapolis Colts. The Niners haven't beaten the Colts since 2001. Jimmy Garoppolo is expected to return as starting quarterback for San Francisco after missing one game with an injured right calf. He will go against former teammate DeForest Buckner. Buckner will play the Niners for the first time since he was traded to the Colts before last season.

OPENING LINE: 49ers by 4 1/2, according to FanDuel SportsBook.

AGAINST THE SPREAD: Indianapolis 4-2; San Francisco 1-4.

TURNOVER DIFFERENTIAL: Colts plus-7; 49ers minus-5.

COLTS PLAYER TO WATCH: DeForest Buckner. The 2020 All-Pro defensive tackle was traded by San Francisco to Indy in March 2020. He’s acknowledged this has not been the start he envisioned, for himself or the team, but now he has a chance to make a statement against his former club.

49ERS PLAYER TO WATCH: QB Jimmy Garoppolo. Garoppolo is expected to return after missing one game with a right calf injury. Garoppolo wasn't sharp in his last two starts, completing 61.9% of his passes with three TDs, two INTs and an 84.2 passer rating.

KEY MATCHUP: Colts RB Jonathan Taylor vs. 49ers LB Fred Warner. Warner was so impressed with Taylor when they played in college back in 2017 that he told teams at the combine the following year that Taylor was the best player he faced in college. Taylor has lived up to that billing in his second season in the NFL, averaging 5.1 yards per carry.

SERIES NOTES: The Colts have won the last four meetings in the series, including a 26-23 OT win in 2017 that dropped San Francisco to 0-5 in coach Kyle Shanahan's first season. ... San Francisco's last win came in 2001 when the Niners intercepted Peyton Manning four times in a 40-21 victory. That loss led to former coach Jim Mora’s "playoffs" rant.... Colts QB Carson Wentz has won both career starts against San Francisco, including a come-from-behind 25-20 win last October for Philadelphia.

STATS AND STUFF: Wentz can tie Andrew Luck, Peyton Manning and John Unitas’ franchise record for most consecutive games with a passer rating of 115.0 on Sunday. He’s had three straight. ... Taylor ran for 145 yards in last week’s victory over Houston and had 116 yards receiving the previous week at Baltimore. In his last 13 games, Taylor has 1,291 yards rushing and 12 TD runs. ... Indy LB Darius Leonard has had a takeaway in four consecutive games. The Colts have forced at least one turnover in seven straight. ... The Colts are tied with Arizona for the most fumble recoveries this season (seven) and the Los Angeles Rams for fewest penalties (24). ... San Francisco has lost three straight games. ... The Niners are 1-6 at Levi's Stadium the past two seasons. ... San Francisco WR Deebo Samuel had 71 yards from scrimmage and his fourth career TD run in Week 5 loss to Arizona. Samuel has at least five catches in four of five games this season. ... Niners DE Nick Bosa's five sacks are the most through five games for the franchise since Bryant Young had six in 2005.

FANTASY TIP: Indianapolis WR T.Y. Hilton returned from a neck injury and had four catches for 80 yards in his 2021 debut. Hilton had a big day last time he faced San Francisco with seven catches for 177 yards in that 2017 game. He is now battling a quadriceps issue but is expected to play.