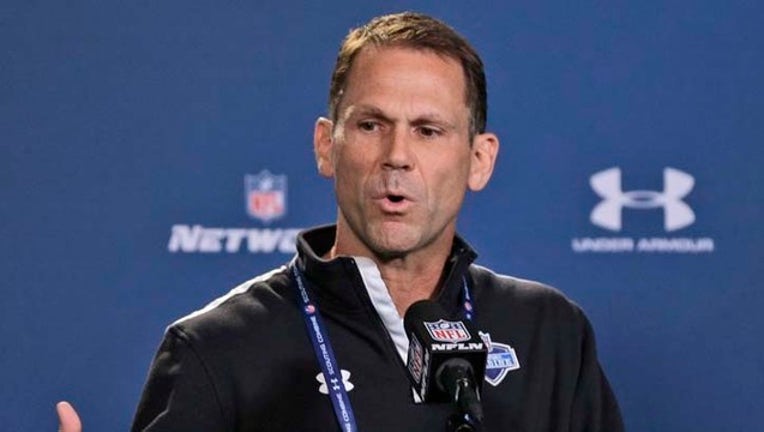 The 49ers used six of their seven picks on the draft's final day on offensive players, including each of their three selections in the fourth round.

After making Clemson punter Bradley Pinion the first kicking specialist selected in this year's draft in the fifth round, the 49ers went back to offense for their final three picks.

All six offensive players fit the mold of power and size the 49ers are looking for after losing three mainstay starters in free agency from an offense that ranked fourth in the NFL in rushing last year but just 20th overall.

"It was all about best player available," 49ers general manager Trent Baalke said. "We went into this draft looking at certain criteria that we felt we needed to do. We wanted to stay big. We wanted to get faster. We wanted to get as much football intellect as we could at each position. We felt we addressed all that. We feel real good about this group of guys, for sure."

Particularly Bell, who earned the nickname "Bell-dozer" while in college thanks to his brawny style with the football in his hands.

"It goes back to OU," Bell said. "The fans kind of gave it to me and it stuck, and that was it through my whole career. That's what they called me and it works."

It worked for Bell while playing quarterback, where he scored 24 rushing touchdowns as a redshirt freshman and sophomore, often entering the game in goal-line and short-yardage situations.

Bell, rated as one of the nation's top prep quarterbacks coming out of high school in 2009, became a more conventional quarterback as a junior in 2013 when he started eight games for the Sooners, passing for 1,648 yards and 12 touchdowns.

But it was also during that season Bell realized he had a better chance of playing football at the next level as an athletic tight end rather than an oversized quarterback. So the 6-foot-6 prospect switched positions last year as a senior, when Bell bulked up to 259 pounds.

"That was my decision," Bell said. "A lot of people thought OU or somebody wanted to do it for me. The big deal was, my dad played tight end in college and in the NFL, and we kind of sat down and talked about quarterback and different ways to maybe transfer and stuff. One thing was, hey, what about playing tight end. I was pumped up about it. So when I made the switch I was fully invested and did it. It was pretty cool."

Bell's father, Mark, also was a fourth-round draft selection in 1979. Mark Bell played six seasons in the NFL as a tight end with the Seattle Seahawks and Baltimore/Indianapolis Colts. Mark's twin brother, Mike Bell, was the second player selected overall in the 1979 draft and played 12 seasons as a defensive end with the Kansas City Chiefs.

Bell became the seventh tight end currently on San Francisco's offseason roster, and the 49ers added an eighth with their final pick in the seventh round by selecting South Carolina tight end Rory 'Busta' Anderson.

Davis is the eighth running back on the roster, which added free agent Reggie Bush and international rugby star Jarryd Hayne during the offseason.

But Davis fits in as a versatile rusher in the mold of Frank Gore, who left San Francisco in free agency this year after leading the 49ers in rushing each of the past 10 seasons while becoming the franchise's all-time leading rusher with 11,073 yards.

At 6-foot-3 and 222 pounds, Smelter becomes the biggest wide receiver on the roster and also fits in with the physical theme of San Francisco's early third-day draft picks. Like Davis, Smelter also draws comparisons to a San Francisco star that he will try to emulate in starting wideout Anquan Boldin.

The 49ers also got bigger along the offensive line by selecting guards Ian Silberman (6-foot-5, 306 pounds) of Boston College in the sixth round and Trenton Brown (6-8, 353) of Florida with the first of the team's two seventh-round picks.