San Francisco 49ers running back Raheem Mostert will undergo season-ending surgery on his knee after getting injured in the season opener.

SANTA CLARA, Calif. - San Francisco 49ers running back Raheem Mostert will undergo season-ending surgery on his knee after getting injured in the season opener.

Coach Kyle Shanahan had said Mostert was expected to miss eight weeks because of chipped cartilage in his knee, but Mostert announced on his Twitter account Tuesday that he will miss the rest of the season.

Mostert said he was "gutted" by the news, but after consulting with multiple doctors felt this was the best decision for his long-term future.

"This gives me, without a doubt in my mind, the best possibility at coming back 110%," he wrote. "I have ALWAYS come back stronger and I will this time too! ... This is obviously not what I worked so hard for. I wish more than anything I could be out on the field with my brothers!!!"

The injury to Mostert is the second season-ending injury suffered by a key 49ers player already this year after the 2020 season was derailed by injuries. Cornerback Jason Verrett tore the ACL in his right knee in the season opener at Detroit.

Both players were placed on injured reserve Tuesday with the Niners signing cornerback Dre Kirkpatrick and promoting cornerback Dontae Johnson from the practice squad to take their place on the 53-man roster. 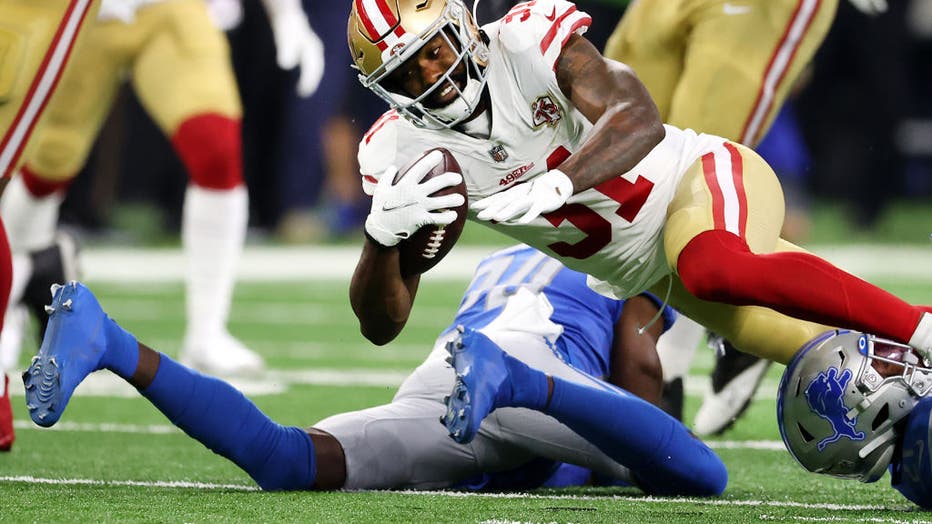 DETROIT, MICHIGAN - SEPTEMBER 12: Raheem Mostert #31 of the San Francisco 49ers is tackled during the first half against the Detroit Lions at Ford Field on September 12, 2021 in Detroit, Michigan. (Photo by Gregory Shamus/Getty Images)

Mostert played only eight games last season because of ankle and knee injuries and lasted only four snaps this year. He had two carries for 20 yards on the opening drive of a 41-33 win at Detroit before getting hurt.

Sixth-round rookie Elijah Mitchell took advantage of the opportunity and rushed for 104 yards and a TD in his NFL debut. The 49ers also have Jamycal Hasty and third-rounder Trey Sermon, who was a healthy scratch for the opener.

The Niners also signed former Lions running back Kerryon Johnson to the practice squad. Johnson rushed for 1,225 yards in 34 games with the Lions.

Mostert is a former special teams standout who was cut seven times and carried the ball only eight times in his first three seasons in the NFL.

But he emerged as a star during the stretch run in 2019 when he led the team with 772 yards rushing in the regular season before a breakthrough game in the playoffs.

He rushed for 220 yards in the NFC championship game that season against Green Bay for the second-most yards rushing in a playoff game to Eric Dickerson’s 248 for the Rams on Jan. 4, 1986. Mostert was the first player to rush for at least four TDs and 200 yards in a playoff game.

For his career, Mostert has 1,610 yards rushing on 284 carries. His 5.77 yards per rush in the regular season and playoffs combined are the best for any running back in NFL history with at least 300 carries.