ENGLEWOOD, Colo. - Emmanuel Sanders arrived in what he called "wide receiver heaven" in 2014 and with Peyton Manning throwing him passes, he certainly found bliss in Denver, where he became a champion and a bona fide NFL star.

On Tuesday, he escaped what had become wide receiver purgatory when the Broncos (2-5) traded him to the unbeaten San Francisco 49ers (6-0), where he'll catch passes from rising star Jimmy Garoppolo and play at Levi's Stadium, site of the Broncos' Super Bowl triumph over the Carolina Panthers.

"It's hard. Anytime you break or you leave a place, it's tough,"

The 32-year-old veteran may have found another utopia in the Bay Area. 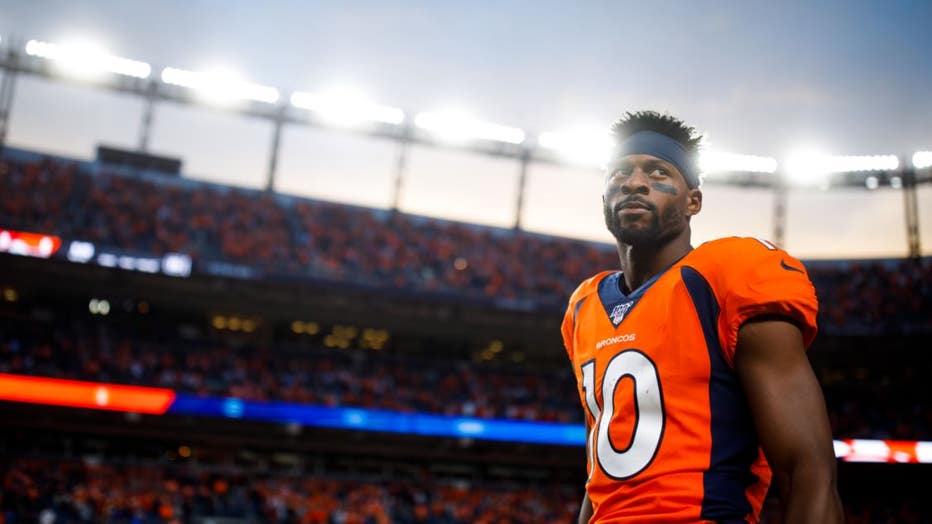 DENVER, CO - OCTOBER 17: Wide receiver Emmanuel Sanders of the Denver Broncos stands on the field before a game against the Kansas City Chiefs at Empower Field at Mile High on October 17, 2019 in Denver, Colorado (Photo by Justin Edmonds/Getty Images)

"Yeah, we kind of run a similar offense. Just talking to Rich (Scangarello), he was pretty much telling me it's the same offense — different concepts, but I'll be able to pick it up easy. Waiting on them to call me right now, see when I'm going to get out there and get my physical and get acclimated with the system," Sanders said.

Along with Sanders, the Broncos sent a fifth-round pick in next year's draft to the 49ers in exchange for third- and fourth-round picks in 2020, a person with knowledge of the deal told The Associated Press, speaking on condition of anonymity because the teams hadn't announced the trade.

Sanders caught 30 passes for 367 yards and two touchdowns this season as he made a successful return from surgery on both ankles. He quickly found a rapport with new quarterback Joe Flacco, who followed Trevor Siemian, Paxton Lynch, Brock Osweiler and Case Keenum in the years after Manning retired.

But second-year pro Courtland Sutton, a fellow SMU alum, emerged as the No. 1 receiver in Denver this season. He has 36 catches for 564 yards and four TDs.

Just two weeks ago Broncos general manager John Elway declared he wouldn't conduct a fire-sale of veterans because he was still focused on winning this season. That was before a dispiriting 30-6 loss at home to AFC West rival Kansas City on Thursday night.

So, Elway traded a veteran receiver for the second straight season. Last year, he dealt Demaryius Thomas to the Texans just ahead of the league's trade deadline.

After spending his first four seasons in Pittsburgh, Sanders was about to sign with the Chiefs when the Broncos summoned him to Denver with a better offer.

Sanders was thrilled to play with Manning and he set career highs in 2014 with 101 receptions for 1,404 yards and nine touchdowns.

In his first three seasons, including one with Siemian at quarterback, Sanders accumulated 256 catches for 3,571 yards and 20 touchdowns in the regular season plus another 23 catches for 276 yards in the playoffs.

Injuries crept in during the 2017 and '18 seasons when he was limited to a dozen games each season.

After catching 47 passes for 555 yards and two touchdowns in 2017, Sanders bounced back last year, leading the team with 71 catches for 868 yards and four touchdowns before tearing his left Achilles tendon in practice Dec. 5 and missing the final four games, all losses, as Denver fell from playoff contention.

Sanders underwent surgery the next day and then opted for a tight-rope surgery on his right ankle a month later after dealing with a high ankle sprain for an extended time.

This year, he had games of 86, 89 and 104 yards in September before a balky knee limited him to a single catch against both the Chargers and Titans. Last week he had 60 yards on five catches against the Chiefs.

San Francisco coach Kyle Shanahan said Monday that he believed the 49ers had the answers at receiver on the roster but opted to make a move anyway for a proven veteran like Sanders.

The 49ers have been seeking a No. 1 receiver since the offseason when they looked into trying to trade for Odell Beckham Jr. before he was sent from the New York Giants to Cleveland instead.

San Francisco spent second- and third-round picks on Deebo Samuel and Jalen Hurd but a top-flight receiver remained one of the few holes on a mostly complete roster.

The Niners rank last in the NFL with just 49 catches from their wideouts and are second to last with 679 yards receiving. Samuel leads all the team's wide receivers with 15 catches for 168 yards and Marquise Goodwin is the only other wideout with more than 10 catches.

Last year's second-round pick Dante Pettis has struggled with only nine catches for 83 yards, while Hurd and slot receiver Trent Taylor have been on injured reserve all season with injuries and aren't expected back for at least a few more weeks.

Sanders looked back fondly on his time in Denver as he signed an autograph for a fan outside Broncos headquarters.

"The Super Bowl run was just fun — '14 and '15 were some of the best days of my life, best times of my life," Sanders said. "... I think about the 8-year-old kid or the 12-year-old kid that has my jersey on. I'm no longer a part of the Broncos organization, so for those fans out there that enjoyed watching me play and always brought energy and always sent me positive messages and (were) rooting for me no matter what, the ups and downs, I really appreciate you guys. I'm forever grateful."