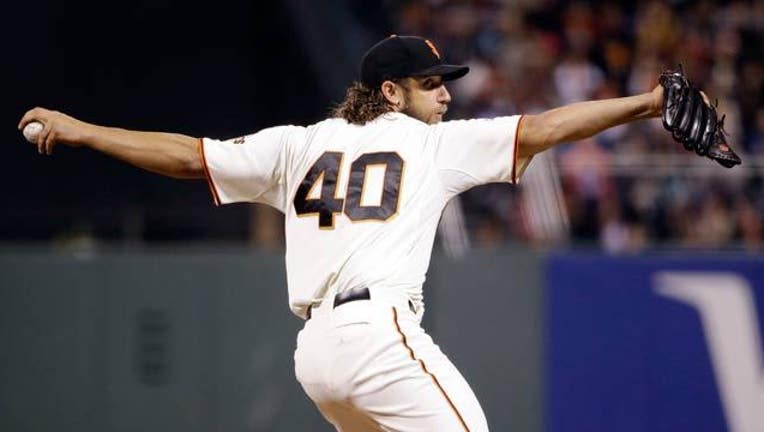 SAN FRANCISCO (AP) — Madison Bumgarner refuses to talk about the notion of getting on a roll. It's not the way he operates, and his way has worked out pretty well so far.

Still, beating Clayton Kershaw and Tyson Ross in consecutive outings and shutting down two top NL lineups is a sign of something.

Bumgarner carried a no-hit bid into the seventh inning on the way to winning back-to-back starts for the first time this season, leading the San Francisco Giants past the San Diego Padres 2-0 on Monday night for their fourth straight win.

"I wasn't worried about losing a no-hitter," he said. "We established everything pretty early, command felt good. Everything's coming together."

Bumgarner (3-1) outdueled Tyson Ross (1-3), striking out six and walking one as each starter threw 107 pitches. Bumgarner left to a standing ovation in the top of the eighth and tipped his cap as he gave way to Sergio Romo.

The reigning World Series MVP didn't allow a hit until Justin Upton's leadoff single in the seventh just got past shortstop Brandon Crawford.

A couple of minor tweaks to his mechanics have made a big difference in his results.

"It'd be nice if you didn't have to worry about this stuff, but this is a game of constant adjustments," he said. "The body changes all the time and you've got to stay on top of it."

Angel Pagan hit an RBI single and Justin Maxwell drew a bases-loaded walk as the Giants built Bumgarner a 2-0 cushion in the third that held up. They wasted Brandon Belt's leadoff double in the second and committed four errors.

The last time the Giants committed four errors in a shutout was June 19, 1933, against the Chicago Cubs. Houston was the last team to do it when the Astros beat the Cubs on Sept. 11, 2012.

"We got away with some mistakes because of the job he did," manager Bruce Bochy said.

Bumgarner faced baserunners in three of his first six innings, two of whom reached on errors. Wil Myers walked in the third.

Before Upton's hit, only a couple of balls were hit hard by the Padres, a fly to right-center by Ross to end the fifth and a flyball to left from Derek Norris in the sixth.

The left-hander, who hit a pair of grand slams last year, also ended an 0-for-11 start at the plate with a fourth-inning single.

San Francisco beat the Padres at home for the fifth time in the last six meetings between the NL West rivals. San Diego took three of four to begin this season at Petco Park, but had its three-game winning streak snapped in the opener of this series.

Catching prospect Austin Hedges made his major league debut when he struck out as a pinch hitter in Ross' spot to begin the eighth, the last batter for Bumgarner. Romo struck out both batters he faced and Santiago Casilla finished the two-hit shutout for his eighth save in 10 chances.

Hedges was called up from Triple-A El Paso, drove to the Bay Area from Sacramento on Sunday night and immediately got his chance from manager Bud Black, who said before the game he doubted he would use his backup catcher as a late-game bat off the bench.

"It was good to get some of the jitters out of the way," he said.

Casey McGehee ended the third by grounding into his majors-leading ninth double play. Bochy plans to give him a mental break.

Padres: INF Yonder Alonso received treatment and was very sore a day after being hit in the back by a pitch. He tried swinging a bat earlier Monday, but experienced discomfort.

Giants: RF Hunter Pence is still testing his fractured left forearm and took batting practice Monday and will do so again Tuesday. He will have Wednesday off then likely a couple more days hitting before beginning a rehab assignment. "He's feeling fine, not any setbacks," Bochy said. ... RHP Matt Cain (flexor tendon strain) is close to throwing a bullpen while RHP Jake Peavy (back strain) could soon begin a rehab outing.

Giants reliever Romo was one of eight people in the state to receive a Latino Spirit Award from the California Latino Legislative Caucus for his work in the community. He received the award earlier Monday at the state capitol.

Giants: RHP Ryan Vogelsong (0-2, 9.31 ERA) tries again for his first victory while making his fourth start in place of Peavy.