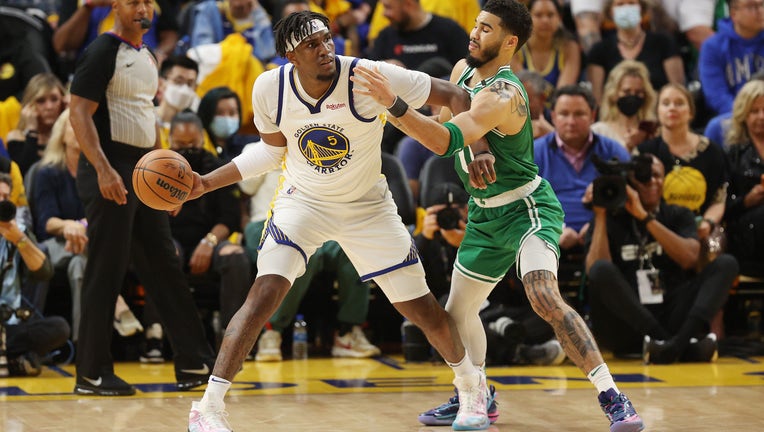 SAN FRANCISCO, CALIFORNIA - JUNE 02: Kevon Looney #5 of the Golden State Warriors looks to pass the ball against Jayson Tatum #0 of the Boston Celtics during the third quarter in Game One of the 2022 NBA Finals at Chase Center on June 02, 2022 in San

Jaylen Brown fueled the late charge and scored 24 points, Al Horford hit six 3-pointers and the Celtics rode the most lopsided fourth quarter in NBA Finals history to a 120-108 victory over the Warriors in Game 1 on Thursday night.

Horford finished with 26 points and the Celtics outscored the Warriors 40-16 in the final 12 minutes after trailing by 15 points late in the third quarter. The 15th-year big man, who turns 36 Friday, played in 141 previous postseason games, most ever before playing in the NBA Finals.

"I felt like the guys kept finding me time after time. Also Derrick White hit some tough shots there, too," Horford said. "I was just getting the looks, knocking them down. That’s that."

Boston made its first seven tries from long distance in the fourth and wound up 9 of 12 beyond the arc in the period as almost everybody got involved in the 3-point flurry. Jayson Tatum was the lone Celtics regular who struggled offensively, finishing 3 for 17, though he did have 13 assists.

Curry scored 34 points in his return to the NBA’s big stage for the first time in three years, but the Warriors couldn't sustain momentum from a 38-point third quarter that put them ahead 92-80 going into the final 12 minutes.

Game 2 is Sunday night back at Chase Center.

Despite the tone setting loss at home, Warriors fans on Thursday said they're confident the dubs won't disappoint at Game 2 of the NBA Finals against the Boston Celtics.

"It’s an unbelievable feeling just to be here and competing at this level against such a dynamic franchise the last couple years," Boston guard Payton Pritchard said. "I think we’re all just looking forward to the challenge to go through the series and try to get it done."

The Celtics were the first team to trail a finals game by 10 or more points after three quarters and win by 10 or more, according to Sportradar,

Derrick White’s 3-pointer over Curry with 5:40 remaining tied the game at 103, then Horford hit from deep the next time down as the Celtics took their first lead since halftime.

Boston is looking to capture its record-breaking 18th title, which would move the Celtics past the Lakers — and now is just three wins away from doing it.

Brown, who starred at nearby California for one college season, made consecutive baskets that tied the game at 47 with 5:03 left before halftime and the Celtics led 56-54 at the break. Golden State then used a signature third-quarter spurt, pouring in 38 points to build a big lead.

Brown then scored five quick points early in the fourth and assisted on an alley-oop dunk to Robert Williams III as the Celtics pulled back within 92-87 with 9:35 remaining. Brown’s 3 at 8:22 made it 94-92 before Klay Thompson answered with a 3.

Andrew Wiggins scored 20 points in his finals debut and Green grabbed 11 rebounds before fouling out with 48.3 seconds left. Thompson contributed 15 points as the Warriors began their sixth finals in eight years after making five straight trips from 2015-19 and winning three championships.

They'll have to win this one from behind after being 21-2 in their previous Game 1s under Steve Kerr.

"It’s a different feeling. You obviously go into Game 2 with more of a sense of desperation. That’s all part of this stuff. We’ve been in this position before," Kerr said. "Boston played a brilliant quarter. They came in and earned the win."

Curry scored a smooth 21 points in the opening period on 7-for-8 shooting, including 6 of 8 made 3s — missing a half-court heave at the buzzer. And Boston struggled to keep up with the Warriors’ snappy ball movement and shooters at every spot on the floor.

Otto Porter Jr. returned from a two-game absence to score 12 points off the bench for the well-rested Warriors. Golden State ended its Western Conference final in Game 5 against Dallas a week earlier at home, while Boston was pushed to the limit with a Game 7 victory at Miami last Sunday.

Golden State dropped to 9-1 this postseason at home, where a sellout crowd in yellow finals T-shirts chanted "M-V-P!" for Curry at every chance.

Marcus Smart scored 18 points with four 3s for Boston. The Celtics star took criticism from Kerr for what the Golden State coach called "a dangerous play" lunging at Curry’s left foot on March 16 in a 110-88 Boston rout that sidelined the 2021 scoring champion for a month before his return in Game 1 of the first round facing Denver.

Now the hard work starts for a Warriors team that went a league-worst 15-50 during the pandemic-shortened 2019-20 season two years ago and lost to Memphis in the play-in game last year before eliminating the Grizzlies in the first round this season.

Curry’s six 3s in the opening 12 minutes were the most ever in any quarter of the NBA Finals. In addition, the 21 points were most since Michael Jordan’s 22 in the fourth quarter of Game 4 vs. Phoenix in 1993.

The Celtics and Warriors combined for 20 first-half 3s, an NBA Finals first-half record.

Celtics: Williams started after being listed as questionable with soreness in his surgically repaired left knee and finished with eight points while playing 24 minutes. Coach Ime Udoka expected him to be limited to about 20 minutes as has been the recent pattern. ... Boston and the Warriors were even on the boards at 39. ... Tatum was 2 for 9 in the first half and 3 for 17 overall for 12 points.

Warriors: F Andre Iguodala (injured disc in neck), G Gary Payton II (broken left elbow) and Porter (left foot soreness) all were back. 2015 NBA Finals MVP Iguodala checked in with 2:36 left in the first to huge cheers after he missed 12 games. ... Golden State is 21-3 in postseason Game 1s dating to the 2014-15 season when the Warriors captured the franchise’s first championship in 40 years — and they had won 13 straight playoff series openers at home, third-longest streak in NBA history, before this.