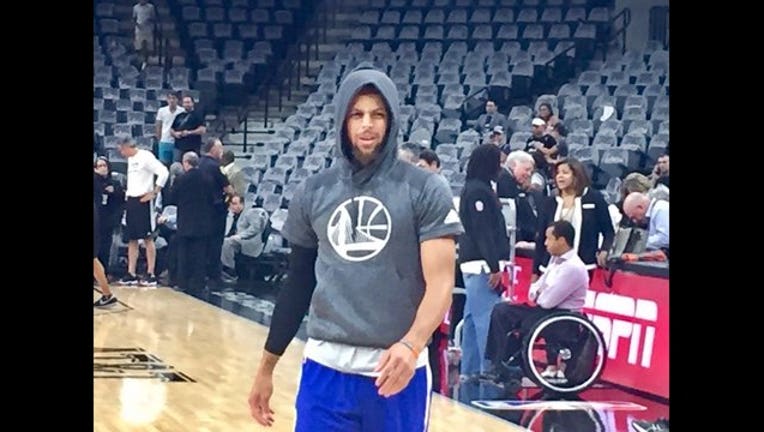 Steph Curry in the arean before Game 4 of the Western Conference finals. (Photo: Joe Fonzi)

SAN ANTONIO (AP) - Stephen Curry scored 36 points and the Golden State Warriors closed out the Western Conference Final against the injury-ravaged San Antonio Spurs with a 129-115 victory Monday night, becoming the first team in league history to start the playoffs 12-0.

Golden State led by as many as 22 points in cruising to its third straight NBA Finals. The Warriors await a possible third straight championship matchup with Cleveland, which leads Boston 2-1 in the East finals.

"It's great to be one of the last two teams standing, we'll see how it goes," said Kevin Durant, who had 29 points and 12 rebounds.

San Antonio's only lead came on the opening possession when Manu Ginobili tossed in a left-handed scoop shot. The Spurs started Ginobili in what could be his final game with the team. The 39-year-old had maintained he will not ponder whether to retire or return until after the season.

Unsure if the beloved veteran will return, the crowd serenaded Ginobili with "Manu, Manu" chants as the game came to a close.

"An amazing competitor, even more fun playing against him," Durant said of Ginobili. "He was phenomenal this series."

Kyle Anderson scored 20 points to lead the Spurs, who were without Kawhi Leonard, Tony Parker and David Lee. San Antonio didn't go down without a fight despite the injuries.

Anderson dove on the court for a loose ball that the Spurs had tipped away defensively, pushing the ball upcourt to Mills who fed Ginobili for a 3-pointer that pulled San Antonio to 108-94 with 7 minutes remaining.

The effort made Spurs coach Gregg Popovich smile and clap at times, but the Warriors' depth and talent proved too much for short-handed San Antonio.

Draymond Green had 16 points, eight rebounds and eight assists for the Warriors.

Spurs forward LaMarcus Aldridge closed out a disappointing series with his second eight-point effort against the Warriors.

Ginobili finished with 15 points in 32 minutes.

Warriors: Golden State has won five straight games over San Antonio, including the regular season, which is the team's longest against the Spurs. .. Warriors starting center Zaza Pachulia missed his second straight game with a bruised right heel. Pachulia's absence allowed him to escape the ire of the Spurs fans, who blame him for Leonard's absence after his controversial close-out on a 3-pointer that Popovich called "dangerous" and "unsportsmanlike." ... Golden State has won six straight road games in the postseason, which is a franchise record.

Spurs: Ginobili had come off the bench in 55 straight playoff games prior to his start in Game 4. ... Murray's four steals in the first half tied Ginobili's franchise record for most steals in a playoff game. ... Ginobili became the 24th player in league history to reach 3,000 career points in the postseason. He now has 3,009 in 15 seasons, having competed in the postseason every year of his career. ... Danny Green has made a 3-pointer in 76 playoff games.