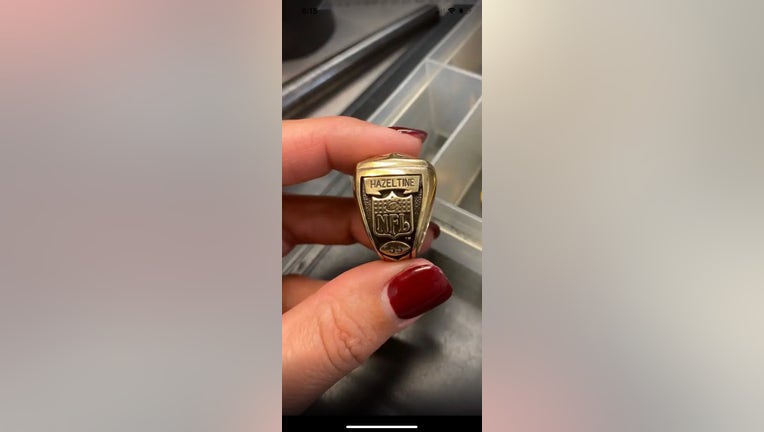 A San Francisco 49ers ring belonging to former linebacker Matt Hazeltine is reunited with his family on July 25, 2022.

When a ring draped in scarlet and gold framing the San Francisco 49ers logo showed up on Aimee Neal's desk in a pawn shop this month, she knew it was something special. The Mill Valley native and lifelong Niners fan said the gold ring was unlike anything she's ever seen.

"I’ve seen lots and lots of different jewelry pieces," said Neal, the operations manager at Best Collateral Pawn Shop in Novato. "I don’t think I've actually ever gotten a player's ring where it says their name and years played."

Neal said she made it her mission to reunite the San Francisco 49ers All-Time Team ring with its recipient whose name is etched on the inside of it-- Matt Hazeltine. 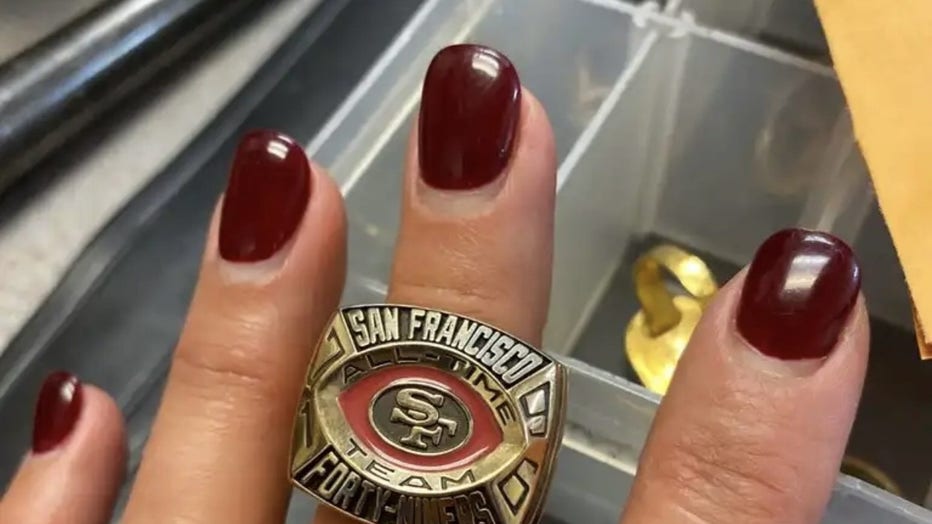 San Francisco 49ers All Team ring belonging to Matt Hazeltine turned up in a Novato pawn shop on July 18, 2022.

"I googled his name," said Neal. "I saw he played for the Niners."

The punch of Neal’s ‘enter’ key turned into a history lesson on her own backyard and proof of the power of community.

Neal posted the ring on the Mill Valley Nextdoor page and was quickly flooded with responses from neighbors wanting to help.

"It grew legs on its own from there people started doing their own research and googling him," said Neal.

"He was a Marin County resident which is where I've lived my whole life," said Neal. "He went to high school in Marin at Tam [Tamalpais], I went to Redwood, Tam was our rival." 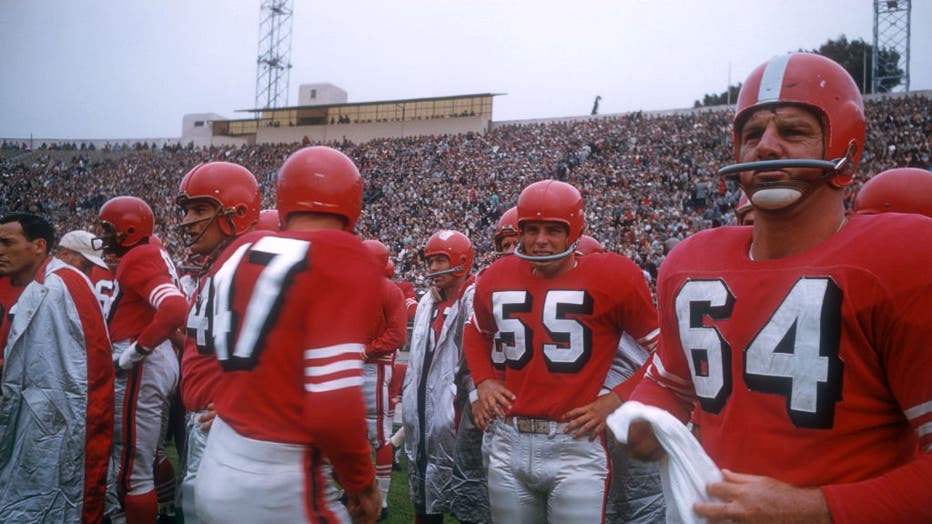 SAN FRANCISCO, CA - AUGUST 19: Matt Hazeltine #55 and Ed Sharkey #64 of the San Francisco 49ers stand on the sideline during an NFL game against the Cleveland Browns on August 19, 1956 at Kezar Stadium in San Francisco, California. (Photo by Hy Peski (Getty Images)

Hazeltine played at Tamalpais High School where he was a star linebacker on the team, he graduated in 1951 and took his talents to Berkley, where he was a standout with the Bears. He made another short trip down the road and found his professional home with his hometown team– the San Francisco 49ers.

"Seeing that he was local and that he played for so long for the 49ers, was incredible," said Neal.

Hazeltine played 14 seasons for the Niners, starting 185 of the 190 games. He grabbed 13 total career interceptions for 130 yards and tallied 38 sacks according to Pro Football Reference.

Hazeltine died in 1987 from ALS; he was 53 years old. In 1989, two years after his death, he was voted into the College Football Hall of Fame.

Through the grapevine, Neal got contact information for Hazeltine's widow, Deborah Hazeltine.

When Neal called, Hazeltine was gracious and happy that people were talking about her husband again.

"She talked a lot about karma and paying it forward," said Neal. "She was happy that people were talking about him again."

It's unclear how the Hazeltine parted with the ring. Deborah Hazeltine did not respond to KTVU's inquiries. Neal also would not reveal who brought the ring to the pawn shop.

"It seemed like it didn't fit in a jewelry case," said Neal. "It is supposed to be with someone who knew him and loved him and who will have it for generations to come."

Neal mailed the ring to Deborah who received it days later.

"Set the ring aside that is a side story," said Neal. "People have made this man go viral 35 years after his death, I would love to be remembered 35 years after I die, and for people to care about what I did in my life."