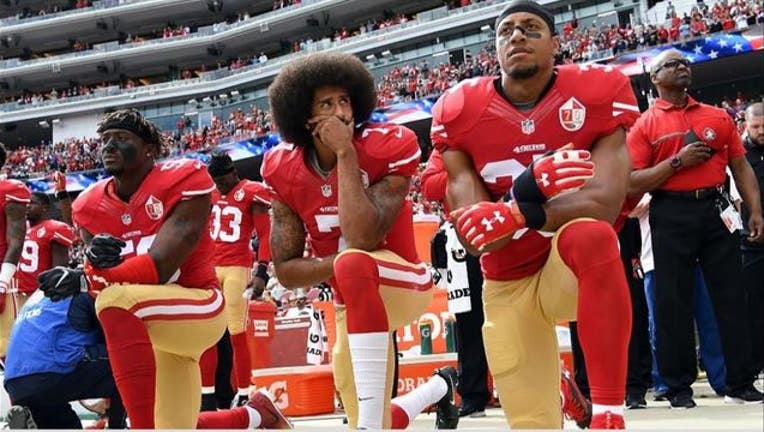 (L to R) Eli Harold, Colin Kaepernick and Eric Reid of the San Francisco 49ers kneel during the anthem prior to the game against the Dallas Cowboys at Levi's Stadium in Santa Clara, Calif. Oct. 2, 2016 Photo: Thearon W. Henderson/Getty

CHARLOTTE, N.C. (KTVU/AP) - Eric Reid says he's being targeted by the NFL because of his pending collusion case after being drug tested seven times since signing with the Panthers on Sept. 27.

Drug screenings throughout the NFL are random, but the Panthers safety says this year for him it has been "excessive." He says in a normal 17-week season he's tested "maybe twice."

On Monday, he tweeted what he says what his seventh "randomly selected" drug test from the NFL.

Reid added: "this doesn't surprise me coming from them."

The safety says he doesn't have anything to hide since he's never failed a drug test, but added it needs to be talked about because "it's like stop-and-frisk - it's just wrong."

Reid believes the extra tests are related to fallout from his collusion case against the NFL which alleges owners conspired to keep him out of the league because of his decision to kneel during the national anthem to protest social and racial injustice.

He did so with Colin Kaepernick beginning in 2016 when both played for the San Francisco 49ers. He wrote a poignant piece in the New York Times describing why he and Kaepernick decided to protest police brutality against people of color with a quiet act of civil disobedience, which has shaken up the country in a national debate. Kaepernick no longer plays for the 49ers or any other team. Though he does have an endorsement deal with Nike.

Reid continues to kneel as a Panther.