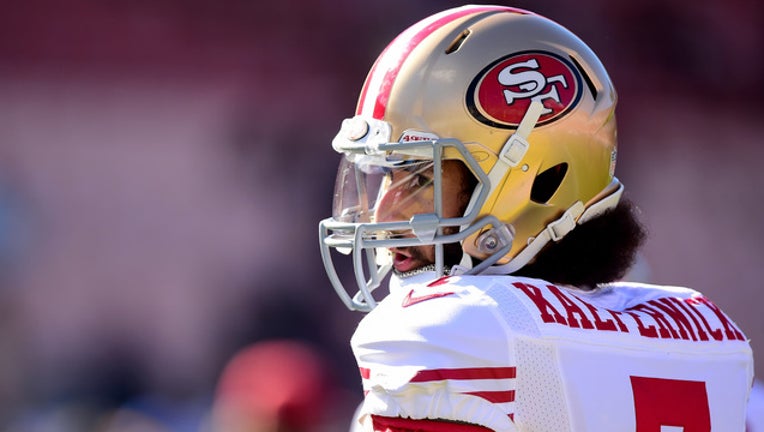 Nike has touched off a furor by wading into football's national anthem debate with an ad featuring Colin Kaepernick, the former 49ers quarterback who was the first athlete to kneel during "The Star-Spangled Banner" to protest police brutality against blacks and hasn't played a game since 2016.

The ad copy reads: "Believe in something, even if it means sacrificing everything."

The ad, part of Nike's 30th anniversary "Just Do it" campaign, has outraged many. Online, people threatened boycotts and posted videos and photos of shoes set on fire, Nike gear thrown in the trash, and swoosh logos cut out of products.

Most big corporations steer clear of politics, and marketing experts disagreed Tuesday over whether the Kaepernick campaign is good business.

But some noted approvingly that it made a big splash and set Nike apart. And they said it could solidify Nike's bond with athletes, especially black ones, an important consideration for a company that relies heavily on sports stars to endorse its products.

Brian Gordon, CEO of Engine Shop, a sports and entertainment marketing agency, said the ad is provocative but "authentic to who they are and the communities they represent and speak to," including the athletes.

"Even in the face of potential backlash, they support their athlete partners, and that's an incredibly powerful statement to the athlete community," Gordon said.

Other athletes in the campaign include tennis star Serena Williams, New York Giants wide receiver Odell Beckham Jr. and Shaquem Griffin, a linebacker whose left hand was amputated when he was 4. But the Kaepernick ad struck a nerve, timed just before the NFL season kicks off on Thursday.

Nike did not return a request for comment about its strategy. Its stock closed down more than 3 percent Tuesday.

"Nike's campaign will generate both attention and discussion which is, arguably, one of its central aims," he said. "However, it is also a risky strategy in that it addresses, and appears to take sides on, a highly politicized issue. This means it could ultimately alienate and lose customers, which is not the purpose of a marketing campaign."

But other experts think the strength of Nike's brand will help it weather the storm and perhaps benefit from it, too. Nike is one of the world's largest sports apparel companies, with $34.5 billion in revenue last year.

"What you stand for is almost as important as what you make," said Allen Adamson, co-founder of marketing firm Metaforce. "It's a polarized marketplace. No matter what you do, you offend some people. They're focused on what they stand for, and if that upsets some users, so be it."

"My guess is that the audience that is reacting so badly to this aren't buying a lot of Nikes anyway," he said. "They'll move on to the next thing. Welcome to the 21st century."

Nike, based in Beaverton, Oregon, has made waves before. An ad for the company's sport hijab went viral in 2017. And a 2010 commercial featuring a voiceover by Tiger Woods' late father when the golfer was trying to recover from a sex scandal drew mixed reviews.

In August, Nike made news when the French Open banned Williams' Nike-branded black catsuit. Nike responded by posting an image of her on social media with the line "You can take the superhero out of her costume, but you can never take away her superpowers."

Brands run the risk of a backlash in taking a political stand in their advertising.

Starbucks was mocked in 2015 for trying to start a discussion about race by writing the slogan "Race Together" on its cups. Pepsi ended up pulling a commercial that showed Kendall Jenner giving a Pepsi to a police officer; some said the ad trivialized the "Black Lives Matter" protests.

John Sweeney, sports communication professor at the University of North Carolina, said the Kaepernick ad was created to provoke people, and in that respect, it succeeded.

"You may have a negative reaction or a positive reaction, but you have a reaction," he said. "They wanted something that would stop the presses and stop people in their places."

For some, the ad has made them bigger fans of the brand.

"I think what Nike did was a tremendous step in fighting against the people who misunderstand the protests by Kaep and players," said Seth Buchwalter, of Portland, Oregon, a lifelong Nike customer.

But Wesley Callaway, of Omaha, Nebraska, said he doesn't agree with kneeling during the national anthem and thinks it is unfortunate Nike is featuring Kaepernick, though he said he doesn't buy many Nike products and won't make any changes in his shopping habits.

"I don't mind them protesting brutality," he said. "I just wish they wouldn't do it during the anthem."

This article has been corrected to give the correct title for Allen Adamson. It's co-founder of marketing firm Metaforce, not BrandSimple marketing consultant.