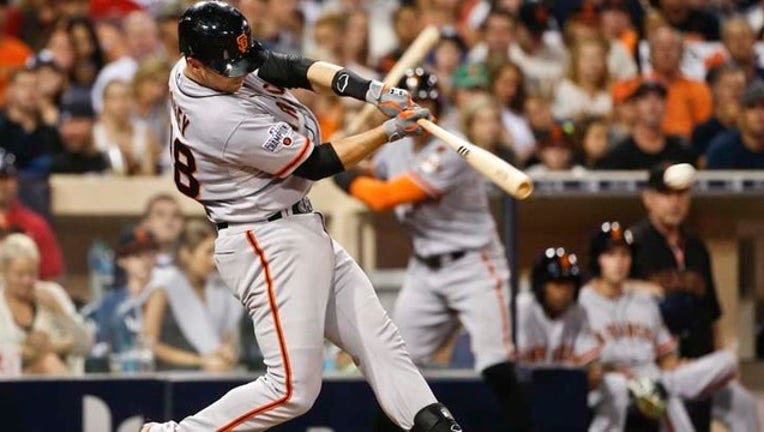 Kemp's 409-foot drive off 40-year-old Tim Hudson into the sandy play area beyond the right-center fence in the third inning was his fourth homer in seven games and 10th overall. It also gave the outfielder 700 career RBIs. Alexi Amarista was aboard on a walk.

Kemp had a strong second half for the Los Angeles Dodgers last season and appears to be heating up when the Padres desperately need it. They've underperformed despite general manager A.J. Preller's dramatic winter roster makeover, including the centerpiece deal to acquire Kemp from the rival Dodgers.

The slugger also homered Friday night against Colorado, and the Padres have hit six in three games since the All-Star break.

The Padres' previous longest winning streak was four games from June 2-6. Then they lost five of their next eight games, costing manager Bud Black his job on June 15. Bench coach Dave Roberts managed one game before the Padres brought in Pat Murphy as interim manager.

Kemp's homer gave San Diego a 2-1 lead. The Giants tied it on Buster Posey's two-out single in the fifth. Kennedy retired the first two batters before allowing three straight singles, including Posey's base hit to left.

San Diego went ahead 3-2 in the fifth, when it twice loaded the bases but scored only one run. Hudson failed to get an out, loading the bases on singles by Yangervis Solarte and Alexi Amarista, and a walk to Kemp. Yusmeiro Petit came on and allowed Jedd Gyorko's go-ahead sacrifice fly. Melvin Upton Jr. tripled leading off the sixth and scored on Solarte's third single.

Gregor Blanco homered leading off the third to give the Giants a 1-0 lead. His shot bounced off the top of the right-field wall and caromed over the Jack Daniel's party deck and into the seats. It was his third.

Hudson (5-8) came off the disabled list to make the start. He had been sidelined by a strained right shoulder since late June. He allowed three runs and five hits in four-plus innings, struck out three and walked four.