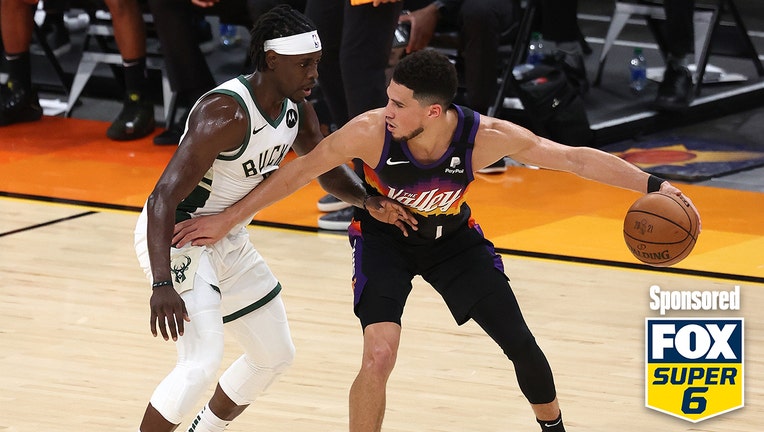 Jrue Holiday of the Milwaukee Bucks defends Devin Booker of the Phoenix Suns during Game Five of the NBA Finals at Footprint Center on July 17, 2021, in Phoenix, Arizona. (Photo by Ronald Martinez/Getty Images)

For the city of Milwaukee, a 50-year drought is 48 minutes away from being quenched.

While the Green Bay Packers and the Milwaukee Brewers have flirted with contention over the past four decades, no Milwaukee Bucks team has brought a championship back to "The Good Land" since Kareem Abdul-Jabbar, Oscar Robertson and the third-year expansion Bucks swept the Baltimore Bullets to win the 1971 title.

Yet, discounting the Suns is a dangerous proposition. Phoenix was 24-12 on the road this year. And a win against the Bucks in Game 6 returns the series to the desert for a winner-take-all Game 7 on Thursday night.

With FOX Super 6, you can win $1,000 on Tuesday night’s action. Just answer all six questions, and you can win the grand prize. Playing is simple, fun and free by downloading the FOX Super 6 app for your phone or mobile device.

Here are the six questions for Tuesday's Game 6:

At the end of the first quarter, which team will be winning and by how much?

In the series, the Suns have carried the first-quarter lead in four of the first five games ⁠— including the last three that Milwaukee has won. That includes the 16-point lead at the end of the first quarter in Game 5 that sure felt like it was Phoenix’s ticket to being one game away from the title. Milwaukee has a chance to ride some momentum and grab the series by the throat early in this one.

How many points will Giannis Antetokoumpo score?

The Bucks have diversified their scoring in Games 4 and 5 after Giannis’ huge 40-plus games in Games 2 and 3. These are the types of moments stars live for ⁠— winning a championship at home. Expect a big number here for Giannis.

How many points will Devin Booker score?

Booker has been outstanding in Games 4 and 5, but that Game 3 clunker in Milwaukee looms larger now that the series has completely flipped. With Chris Paul more active in Game 5 and Deandre Ayton battling on the block, maybe Booker isn’t needed to score as much. But it is still recommended to get into the 30s if the Suns are going to go home for another game.

How many total blocks will there be?

Through five games, the two teams have averaged seven blocks a game with both Antetokounmpo and Ayton averaging more than a block per game ⁠— Giannis at 1.2, Ayton at 1.4. This game might be played on the block and that could lead to more rejections than ever.

How many assists will Chris Paul have?

For the first five games, Paul is averaging 8.8 assists per game. Again, with Phoenix in the height of desperation, it needs its veteran to guide the way on Tuesday night. We’ll say 11 assists for Paul in this one. Anything less, and the Suns will be driving through a victory celebration in the Deer District on the way back to the airport.

Which team will win and by how much?

All the stars are aligned for the Bucks to close out the season on Tuesday night. They are great at home. They have played extremely well in late-series spots all postseason long. Antetokounmpo, Middleton and Holiday have been incredible in the previous three games and the Suns have no answer. Milwaukee wins this in a tight one, but with this caveat: If the Bucks don’t close them out in Game 6, they will lose Game 7 on the road.

Play FOX Super 6 for the biggest events in sports each and every week, from the NBA Finals to the MLB All-Star Game and much, much more! Just download the app and make your picks for your chance to win big absolutely for free.