Professional sports leagues in the United States each hold annual drafts, but they use different methods in determining the draft order.

CLEVELAND - The 86th annual NFL Draft opened Thursday night on the coast of Lake Erie, welcoming the first 32 of this weekend’s 259 draftees.

No suspense at the top of this NFL draft: Trevor Lawrence to the Jacksonville Jaguars.

The star quarterback who led Clemson to a national title and generally is considered the best prospect at the position since Andrew Luck in 2012 has had his name called first by Commissioner Roger Goodell.

Lawrence, a junior, joins new coach Urban Meyer, himself a major success in the college ranks, in trying to turn around a franchise that went 1-15 last season.

In what has been billed a "quarterbacks draft," at least for the first round, Zach Wilson of BYU is the second straight passer to go at the top of the selections.

The New York Jets chose Wilson after Jacksonville grabbed Clemson QB Trevor Lawrence. At least three other signal callers are expected to go in the first 32 picks — and likely early in the round.

Trey Lance, a quarterback from FCS school North Dakota State who started 17 games in his career, was chosen third overall in the NFL draft by San Francisco.

Kyle Pitts is considered by many the most dynamic player in this year’s draft. The Atlanta Falcons certainly thought so and selected the Florida tight end with the fourth overall pick.

LSU receiver Ja’Marr Chase, who sat out last season because of the COVID-19 pandemic, was chosen fifth overall in the NFL draft by Cincinnati.

The first offensive lineman chosen in the NFL draft is Penei Sewell of Oregon. The tackle who opted out of last season has been taken seventh overall by Detroit and should be an immediate starter.

Heisman Trophy winner DeVonta Smith became the sixth player from the Southeastern Conference, and third from Alabama, to be taken in the first 10 selections of the NFL draft.

Smith, the first receiver to win the Heisman since 1991, went No. 10 to the Philadelphia Eagles, who traded up to get quarterback Jalen Hurts’ former college teammate. 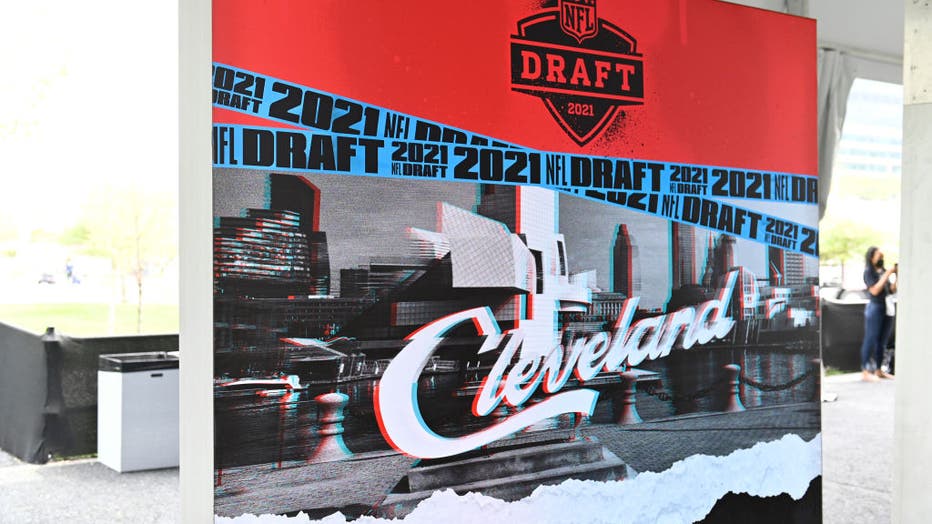 A sign for the NFL Draft 2021 is on display inside the NFL Locker Room at the NFL Draft Experience on April 28, 2021, in Cleveland, Ohio. (Photo by Duane Prokop/Getty Images)

Like so much of the world, professional sports are trying to find their way back to their pre-pandemic norms. Last year, the NFL held its draft virtually — making it one of the few sporting events to take place at the time.

Commissioner Roger Goodell announced each pick from the comfort of his basement while encouraging fans to continue the tradition of booing the commissioner.

Draftees celebrated at home as fans watched a live feed of their watch parties.

It drew record ratings, but the absence of live reactions to picks and blockbuster trades were glaring — as was the absence of draftee’s tearful march to the draft stage to bearhug the commissioner.

When Mr. Irrelevant — the final player selected — closed out the draft, fans couldn’t even perform the ceremonial trolling.

That’s why the NFL is so excited to be welcoming draftees, fans and the commissioner back to the league’s biggest event of the offseason.

"We are thrilled to be heading to Cleveland for the NFL Draft, which has become one of the most highly anticipated events in sports," said Peter O'Reilly, an NFL executive. "Just months after executing a safe and successful Super Bowl LV, we look forward to bringing the excitement of our Draft traditions to fans in collaboration with the Browns, Destination Cleveland, Greater Cleveland Sports Commission, the City of Cleveland, and all of our local Cleveland partners."

The NFL is one of many major brands partnering with the Biden administration to combat COVID-19 vaccine hesitancy. In January’s Super Bowl, the league invited fully-vaccinated health care workers from around the country to give the game a live crowd.

Keeping with that, the league is welcoming fans, chosen by all 32 clubs as their draft ambassadors, to the Draft Theatre — the viewing area near the main stage. The NFL is calling it the "Inner Circle" and said all attendees must be fully vaccinated.

"The league will continue to partner with public officials at the state and local levels to help better ensure a safe and successful Draft," the NFL said in a news release. "Fans attending Draft activities will be required to wear face coverings and adhere to appropriate physical distancing."

The Cleveland Browns are this year’s host team, so expect to hear from the Dawg Pound when they come on the clock at Pick 26.

Special guests, like legendary players, super fans or local charities, have been a growing part of the draft experience in recent years. They usually announce draft picks in the later rounds.

The draft resumes Friday night with Rounds 2 and 3 at 7 p.m. ET. Day 3 shifts the final four rounds to daytime hours, beginning at noon ET on Saturday.