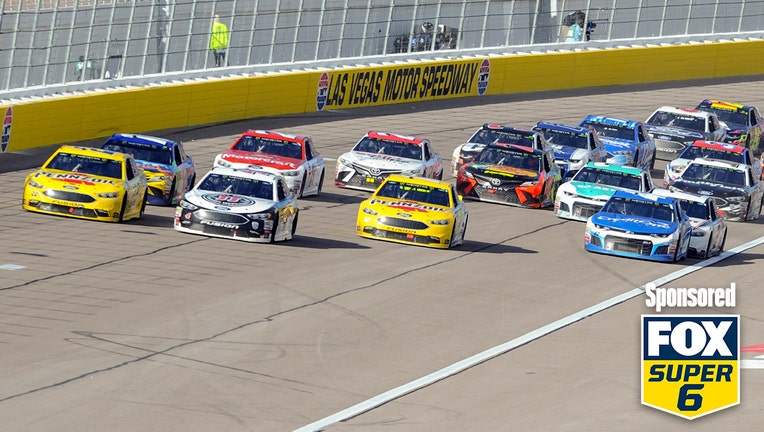 A general view of a restart of the field of cars during Monster Energy NASCAR Cup Series- Pennzoil race on March 4, 2018 at Las Vegas Motor Speedway in Las Vegas, NV. (Photo by Samuel Stringer/Icon Sportswire via Getty Images)

A weekend in Las Vegas can be a high-risk, high-reward proposition for anyone who walks the Strip.

But you don’t have to head to the Bellagio Fountains to be a big winner this weekend, as NASCAR heads to Las Vegas for the Pennzoil 400, the fourth stop on the Cup circuits schedule for the 2021 season.

Pick the right answers to six questions about Stage 2 of the race and you can win the jackpot of $10,000 of Clint Bowyer’s money.

It’s free to play and it’s so much fun. Just download the FOX Super 6 app on your phone or mobile device by clicking on this link, then answer the six questions. That’s all you need to do!

Here are the six questions that are in play for this week’s race:

Which driver will lead the most laps by the end of Stage 2?

Logano is the two-time defending champion in this event, which was one of the final ones that took place before the shutdown for COVID-19 took place. Overall, Hamlin has led the most laps with 103 through the first three races, with three stage wins in nine stages so far. Elliott is next on this list with 57 – sitting fourth overall behind William Byron and Chris Buescher.

While all three races have been won by different manufactures overall, Hamlin’s Toyota has been the strongest car in the bunch. He won both Stage 2’s in Daytona and finished second in Stage 2 in Homestead last week behind Byron’s Chevy.

Logano has a good track record at Las Vegas, winning the 2019 and 2020 March races in the desert with six Top 5 finishes in his career. Hamlin and Byron, however, have both had extremely fast cars in recent weeks.

Which Driver will gain the most positions in Stage 2 (Hard Charger)?

Blaney may have the best chance in this because his car is slanted back towards the end of the pack, lined up at the 26th spot. Truex is located near the front of the grid, but has been a fashionable pick for many to win this race.

How many cars will finish Stage 2?

In last March’s Pennzoil 400, only two cars failed to finish 245 of the 267 laps of the Las Vegas course. The September race had four cars that failed to make it more than 227 laps of the 268 that took place. In other words, the history of the course doesn’t lend to the big crash that knocks a lot of the field out.

Which driver will have the best finish position in Stage 2?

The sleepy choice would be Hamlin, who has done everything but win the checkered flag at the end of the first three races. His first two stages in Daytona and Homestead have been outstanding. Truex, however, could be the best of the rest of the field on this list because of his favorable start position and his success at Las Vegas in the past.

Play Clint Bowyer's NASCAR Stage 2 Super 6 content for free and you could win $10,000! Just download the Super 6 app and make your picks now for your chance to win!