Failing to capitalize on lofty pre-season expectations, Joe Girardi was fired as manager of the Philadelphia Phillies on Friday.

PHILADELPHIA - Joe Girardi managed a Phillies team with the reigning NL MVP, five 2021 All-Stars, a $224 million payroll that nudged the franchise above the luxury tax and expectations of ending the longest playoff drought in the National League.

Buried deep in the NL East standings, and with a sagging bullpen, defensive deficiencies and slumbering starts from some of their high-priced veterans, Girardi paid the price for Philadelphia's miserable start. He was fired Friday, becoming the first major league manager to lose his job this season after failing to turn a team with a record payroll into a playoff contender.

Expected to contend for the NL East title, the Phillies are 22-29 and 12 games behind the first-place New York Mets. The Phillies entered Friday 5 1/2 games out of the second NL wild-card spot.

"Oh, I think we can make the playoffs. I think we’re in a position where we can battle back to do that. I do believe that," president of baseball operations Dave Dombrowski said.

Girardi's first year with Philadelphia was the pandemic-shortened 2020 season. The Phillies went 82-80 last year and he ends his tenure with a 132-141 record. Girardi managed the New York Yankees from 2008-17 and the Florida Marlins in 2006.

The Phillies have lost 12 of 17 games heading into the opener of Friday’s three-game series against the Los Angeles Angels.

"We underperformed and that falls on me. This is what happens," Girardi told SiriusXM's MLB Network Radio. "I think there’s more talent in that room than the way we have played."

"It’s not something that can’t be fixed and changed," Dombrowski said. "I think we already started some of those changes this winter time when we made some changes within our system, our organization, a lot of changes, but those things don’t show up overnight." 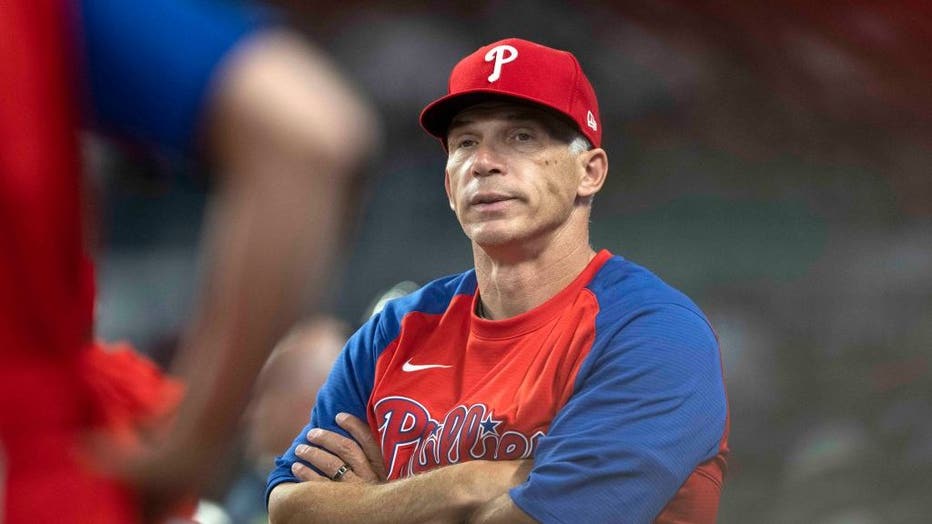 ATLANTA, GA - MAY 24: Joe Girardi #25 of the Philadelphia Phillies in the dugout during the fourth inning against the Atlanta Braves at Truist Park on May 24, 2022 in Atlanta, Georgia. (Photo by Adam Hagy/Getty Images)

Harper has been plagued most of the season with right forearm and elbow soreness and was forced to give up right field and play designated hitter. Second baseman Jean Segura is out for up to three months with a fractured right index finger. The Phillies are 12-15 at home and are 4-10 in one-run games. They are 3-7 over their last 10 games.

"I think realistically we should have been 7-3. Well, that’s going to fall on me because we weren’t," Girardi said. "I just pray that they get better and that they get to the playoffs."

The lowlight was a May 5 loss at home to the New York Mets when they blew a six-run deficit in the ninth inning and lost 8-7. The Mets had lost the previous 330 times they trailed by six runs in the ninth.

"I think there’s a number of reasons we didn’t win. We gave too many extra outs that cost us four or five games, maybe even more," Girardi said.

Girardi replaced Yankees manager Joe Torre after the 2007 season and spent a decade in pinstripes. Girardi led New York to its 27th World Series title, beating the Phillies in six games in 2009, and his 910 wins were sixth most in team history.

Girardi said last week the season was "frustrating" but he was not concerned about losing his job. Girardi, though, likely had to make the playoffs this season after the Phillies declined to pick up his option for 2023.

Philadelphia’s struggles go well beyond Girardi. Gabe Kapler was fired after a 161-163 record in two seasons and then led the San Francisco Giants to a 107-55 record and the playoffs last season.

Thomson was Philadelphia's bench coach and coordinated spring training for the last five seasons. He was hired before the 2018 season.

"I am ready to lead this team and look forward to getting to work and turning this around," he said.

His first game is against an Angels team that has lost eight straight games overall and six straight on the road.

"As a bench coach you’re spending a whole lot of time preparing for the other club and probably not so much time in the clubhouse," Thomson said. "I’m going to take the preparer hat off. I’m still going to prepare some, but I’m going to have my confidence in the coaches around me to keep me informed of information. Now I can go out in the clubhouse and really communicate with the players, get to know them, get the feel, know what they like, know what they don’t like, know when they’re hurt, know when they’re not hurt, so that they know that I’ve got their back and that I support them."