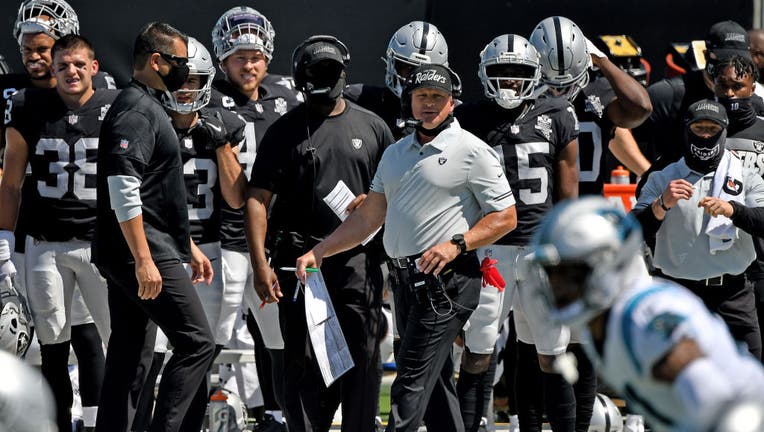 Head coach Jon Gruden watches his team against the Carolina Panthers during their game at Bank of America Stadium on September 13, 2020 in Charlotte, North Carolina.

LAS VEGAS - The Las Vegas Raiders have been fined $50,000 for allowing an unauthorized team employee into the locker room following a game this season.

A person familiar with the punishment told The Associated Press on Saturday that the fine was issued for violating COVID-19 protocols following a win over New Orleans on Sept. 21. The person spoke on condition of anonymity because the league didn’t announce the punishment.

This is the second time this season the Raiders have been sanctioned by the league for violating COVID-19 protocols. Coach Jon Gruden was fined $100,000 and the team docked $250,000 when Gruden didn’t properly wear his mask on the sideline during the game against the Saints.

The league has established strict protocols to help prevent the spread of the coronavirus. Teams are allowed only 40 designated employees, besides players, in the locker rooms.

There is even more emphasis on the rules after two games scheduled for Sunday have been postponed because of positive coronavirus tests by several players on Tennessee, New England and Kansas City.

The NFL is also looking into the conduct of several Raiders players from a charity event held by tight end Darren Waller on Sept. 28. Several players, including quarterback Derek Carr, attendedin violation of Nevada coronavirus protocols. They were seen on video without masks mingling and talking to guests.

Gruden, who said last month he was sick with the coronavirus in the offseason, has praised his team for handling the rules despite the violations.