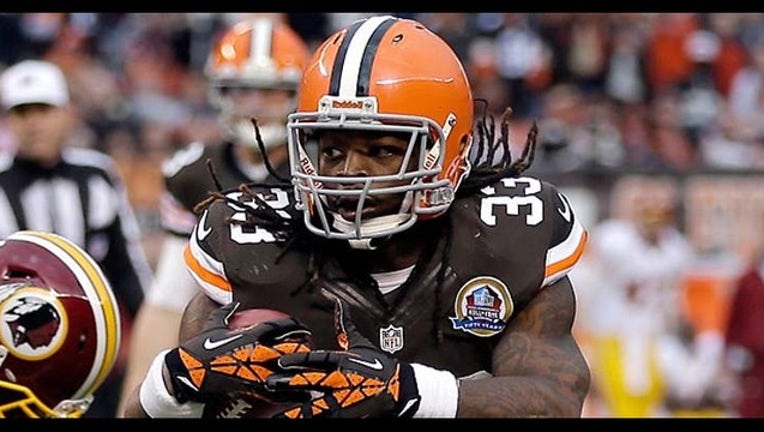 ALAMEDA, Calif. (AP) -- After going from the third overall draft pick to dropped by two teams in three years, running back Trent Richardson knows he is running out of chances to make it in the NFL.

Richardson signed a two-year deal with the Oakland Raiders on Tuesday with hopes that a new team can resurrect what once was a promising career.

"That's a taste that you never want to get in your mouth again," said Richardson of being let go by a team. "Hopefully, this is my last stop, and I'm going to do whatever I can to make this my last stop. Until I'm ready to walk away from the game, I don't want to leave here."

Richardson entered the NFL as one of the most heralded running backs in years after a successful college career at Alabama. Richardson is one of three backs since 1996 to go in the top three picks in the draft, joining No. 2 overall picks Reggie Bush in 2006 and Ronnie Brown in 2005.

But after a somewhat promising rookie year in Cleveland when he rushed for 950 yards and 11 touchdowns and caught 51 passes and another score while playing much of the season with broken ribs, Richardson has been sent away by teams in his next two seasons.

Cleveland traded Richardson to Indianapolis after just two games in the 2013 season for a first-round pick. Thought to be the final piece needed to solidify an offense led by star quarterback Andrew Luck, Richardson never fit in with the Colts.

"The very first humbling experience I had was getting traded," he said. "I spent the whole year, just wondering, why in the world and how in the world did I get traded. Looking back at it, even if they said it was a business move, in my head, it's still some type of, `OK, you still got traded."'

He averaged just 2.9 yards per carry with Indianapolis in the final 14 games of the 2013 season and was not much better last season when he ran for 519 yards, averaging 3.3 yards per carry.

Richardson played just one snap in three playoff games last season and never touched the ball. He was inactive for a divisional game against Denver and was suspended for the AFC championship game against New England because he didn't contact the team when his girlfriend had pregnancy complications, and he missed mandatory functions.

That suspension voided his contract, the Colts argued. Richardson has filed a grievance to recover $3 million in salary.

"From the beginning, trying to fit into their program, it was different for me," he said. "For me, it was more of me being an all-time blocker. There's nothing wrong with blocking, but I still want to be able to help the team in different types of ways. I don't look at it as a bad thing. I just think it was a bad marriage."

The Raiders have been looking to upgrade a running game that was the least productive in the NFL last season. Richardson joins a backfield in Oakland that features Latavius Murray, who showed promise last season by rushing for 424 yards on 82 carries in limited action, and free-agent acquisition Roy Helu.

Neither of those players have been the featured back and Richardson believes he can earn the starting role in Oakland after going over the playbook with coach Jack Del Rio on Monday night. Richardson said the offense is similar to what he ran in college at Alabama.

"He just said there is just a lot of opportunity out here," Richardson said. "He said he isn't going to promise me anything, but if I come in and work, I can be that bell cow."