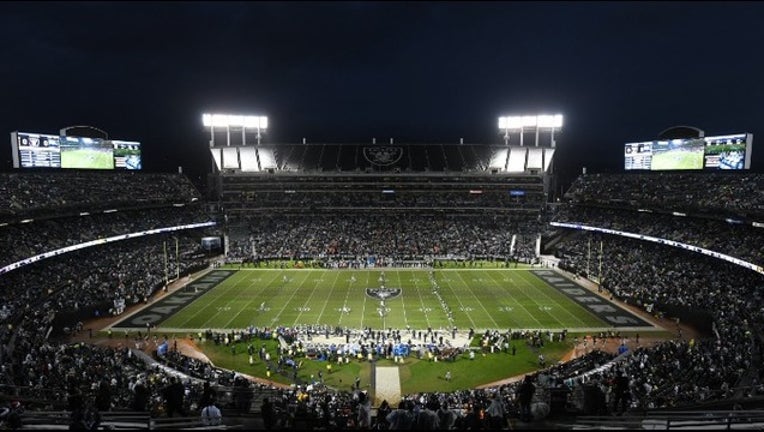 A filie photo shows a view of the kickoff during a NFL game between the Oakland Raiders and the Denver Broncos at Oakland-Alameda County Coliseum on December 24, 2018 in Oakland, California. (Photo by Robert Reiners/Getty Images)

OAKLAND, Calif. (BCN) - Oakland-Alameda County Coliseum Authority commissioners voted unanimously on Friday to approve a lease agreement that will keep the Raiders football team playing at the Coliseum for at least one more year.

The Raiders plan to move to Las Vegas in the near future, but a new football stadium that's being built for them there won't be ready until fall 2020 at the earliest.

Scott McKibben, the authority's executive director, said that rent the Raiders pay to the authority will increase by $4 million this year, from $3.5 million to $7.5 million.

McKibben said if the new stadium in Las Vegas isn't ready by fall 2020 and the Raiders need to play in Oakland for a second additional season the rent will increase to $10.5 million.

The Coliseum Authority and the Raiders had reached a tentative agreement for a new lease late last year but it fell apart after the city filed a federal breach of contract lawsuit in December against the Raiders and the National Football League for the move to Las Vegas.

Many fans feared that the Raiders' game against Denver last Dec. 24 would be the team's final game in Oakland. The team explored the possibility of playing this fall at other venues in the Bay Area, including Levi's Stadium in Santa Clara and Oracle Park in San Francisco.

However, nothing materialized so the Raiders resumed negotiating with the Coliseum Authority.

McKibben said, "When Mark Davis (the Raiders' owner) took the deal off the table I told him to look at other options if he wanted but to remember us."

McKibben said, "They did their window shopping but they realized they had a good deal here," even if the new lease is less favorable to the Raiders than previous leases.

He said the authority had more leverage in the current lease negotiations than in previous negotiations "because the Raiders needed a place to play" and the deadline imposed by the National Football League is March 24.

The agreement still needs to be approved by the Oakland City Council and the Alameda County Board of Supervisors but Miley said he expects both boards to vote on it next week.

Oakland City Councilman Larry Reid, who is the commission's vice chair, said he's still upset about the Raiders' plans to leave Oakland and isn't excited about them continuing to play at the Coliseum but said the lease extension is good "for their die-hard fans."

Miley said he hopes the extension "may provide a sense of healing" between the Raiders and the community.