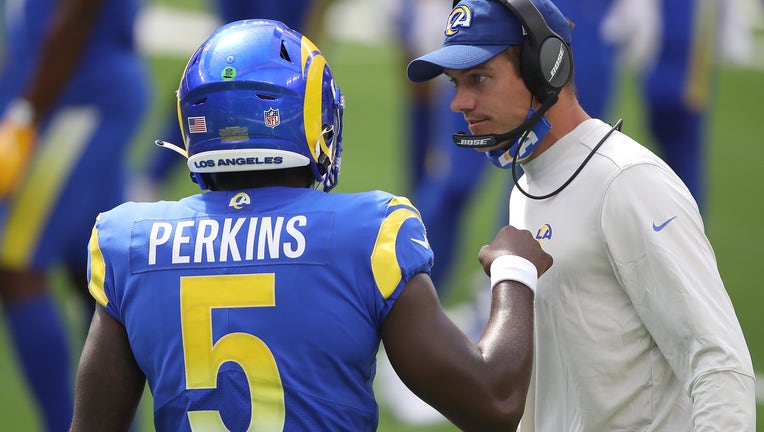 LOS ANGELES - The Los Angeles Rams left space in their final roster cutdown to go shopping on the NFL waiver wire this weekend.

The moves trimmed the Rams' roster to 52 players, one below the limit, with an interesting balance among several positions. Los Angeles kept four tight ends, five safeties and 10 offensive linemen, but only three inside linebackers.

Coach Sean McVay confirmed the Rams aren't done putting together their group for the upcoming season.

“We'll get a chance to look at all these teams' waiver wires to see who comes available,” McVay said. “We always kind of knew that we were going to have that spot to give with what we did with A'Shawn Robinson. We had that in our back pocket to at least have that one spot if there was somebody we were interested in claiming.”

The Rams' most likely spot for an addition seems to be inside linebacker, where their three current players — Micah Kiser, Kenny Young and Troy Reeder — have only 766 combined defensive snaps of NFL experience, with none for Kiser, a probable starter.

But McVay wouldn't tip the Rams' intentions for their open spot, likely because he's waiting to see what discarded gems are available. If the Rams don't find a waived player to sign, McVay said they'll promote someone from their practice squad.

“Obviously we went a little bit thinner at some spots ... but we felt like this was reflective of some of our best 53 players,” he said.

None of the Rams' cuts was shocking, but an interesting collection of players earned roster spots, including seven of their eight draft picks and three undrafted rookies: running back Xavier Jones of SMU, receiver Trishton Jackson of Syracuse and defensive lineman Eric Banks of UTSA.

Perkins, the Virginia passer signed as an undrafted free agent, will be back if he clears waivers, McVay said. The offensive guru also said he has no qualms about going into the regular season with John Wolford and Perkins as Jared Goff's backups, even though neither quarterback has played an NFL snap.

Rookie linebacker Terrell Lewis won't be available for the Rams' season opener against the Dallas Cowboys at SoFi Stadium on Sept. 13 because of a knee injury. McVay said the Rams hope to disclose more information about Lewis' injury when they get test results back on Wednesday.