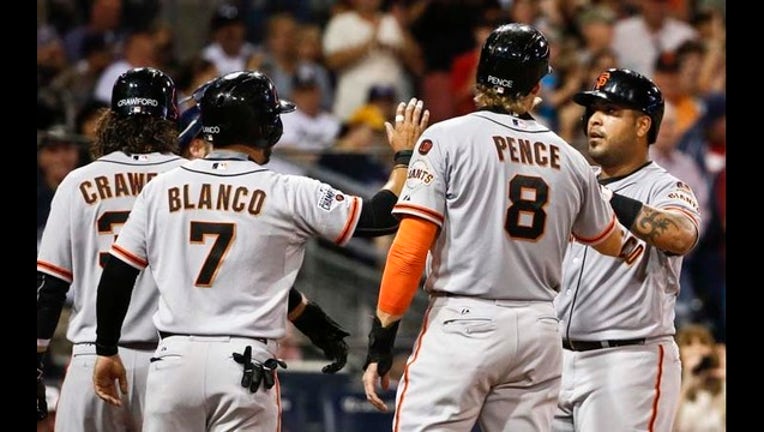 SAN DIEGO — Rookie Chris Heston took a no-hitter into the sixth inning and Hector Sanchez hit an impressive grand slam for one of three San Francisco Giants home runs in a 9-3 victory over the San Diego Padres on Tuesday night.

Heston, who no-hit the New York Mets on June 9, allowed one hit and faced just two over the minimum in 7 1-3 innings. He received a standing ovation from the many Giants fans in the stands above the third-base dugout when he was pulled by manager Bruce Bochy after issuing a one-out walk in the seventh. He struck out six and walked two.

Heston and two relievers combined on a four-hitter. The Padres scored three unearned runs in the ninth.

Heston (10-5) didn't allow a hit until Melvin Upton Jr.'s broken-bat, bloop single over the outstretched glove of second baseman Joe Panik leading off the sixth. Upton was erased on a double play.

Otherwise, Heston shut down the Padres, ending their season-high, five-game winning streak under interim manager Pat Murphy. The 27-year-old right-hander didn't allow a baserunner until he hit Matt Kemp with a pitch with two outs in the fourth. The pitch hit Kemp on the left arm and caromed off his right shoulder, knocking him to the ground. Kemp, who came in with a season-high, eight-game hitting streak, left the game after flying out in the seventh.

Sanchez's bat flip after his moonshot grand slam in the sixth angered the Padres. After Sanchez grounded out in the ninth, Padres pitcher Shawn Kelley said something to him as he headed back to the dugout and both benches and bullpens cleared. The umps restored order.

Padres starter Odrisamer Despaigne allowed Hunter Pence's infield single leading off the sixth and made way for Dale Thayer. Thayer struck out Brandon Belt before allowing a single to Brandon Crawford and a walk to Gregor Blanco before Sanchez drove a 93-mph fastball an estimated 428 feet into the seats. It was his second career slam and the sixth by the Giants this season.

Pence hit a 434-foot home run that almost landed in the Giants' bullpen beyond the fence in left-center leading off the second. It was his fifth. Another run scored on a double play.

Crawford gave the Giants a 5-0 lead when he hit a three-run homer into the Jack Daniel's party deck atop the right field wall with one out in the fourth. It was his 13th.

Despaigne (3-7) allowed six runs and seven hits in five-plus innings, struck out one and walked two.